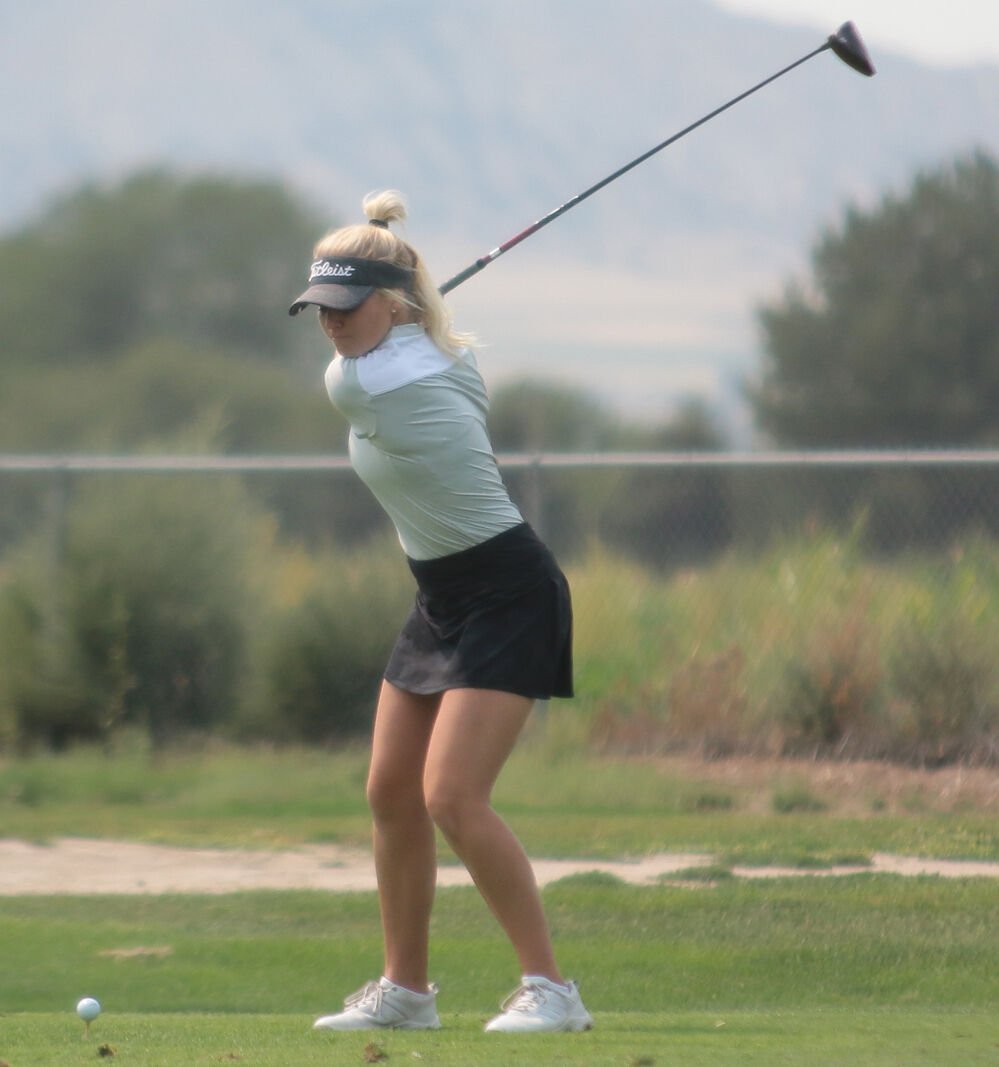 Scottsbluff's Anna Kelley starts her swing on hole 14 during the Scottsbluff Invite on Tuesday. 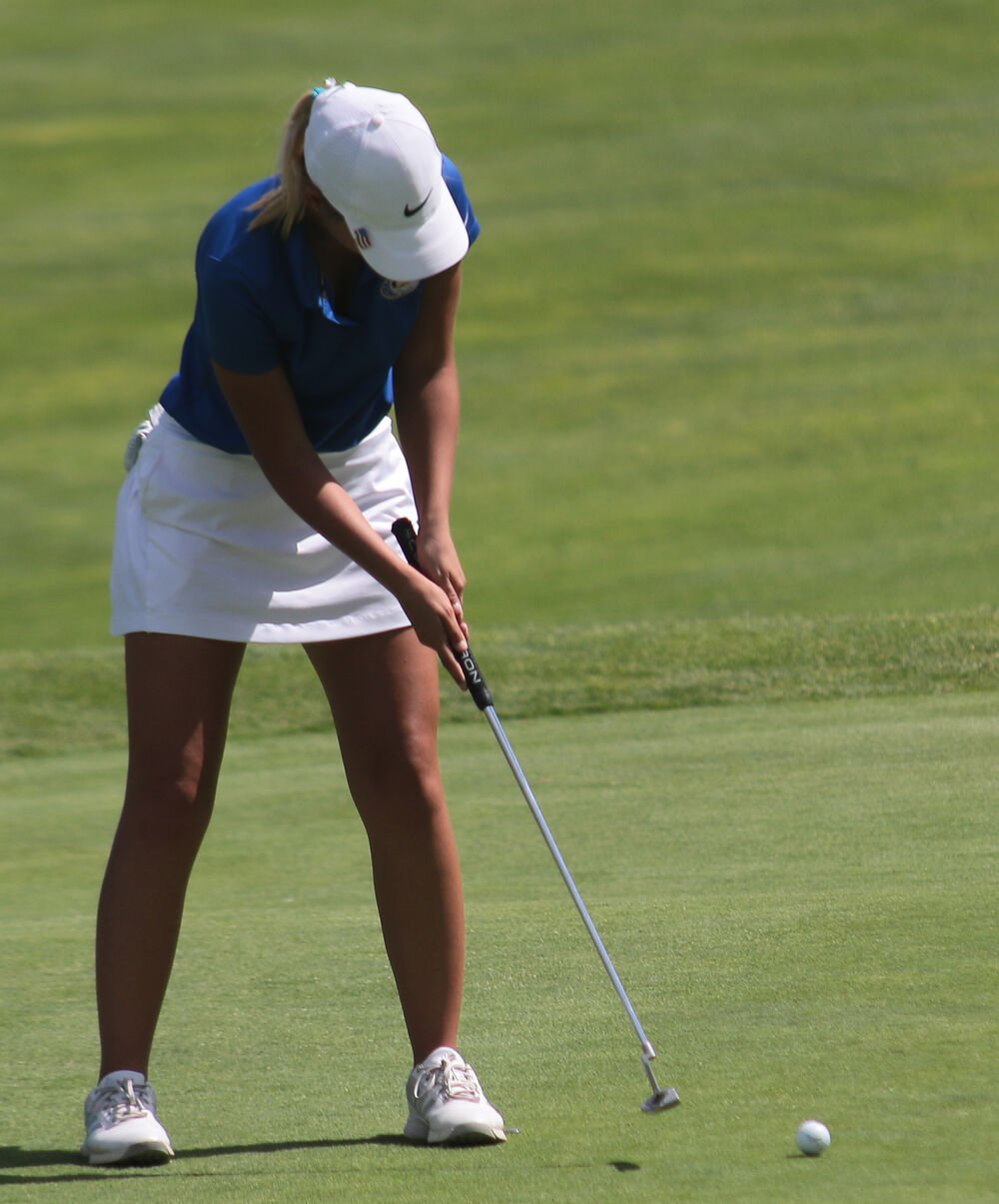 Gering's Emily Krzyzanowski putting the ball into hole 18 at the Sidney Invite on Aug. 24.

The Scottsbluff Invite saw local golfers, as well as teams wanting to get a chance to play on this course before state, compete at the Scotts Bluff Country Club on Tuesday.

By the end of the 18 holes, there were two athletes tied for first, Gering’s Emily Krzyzanowski and Scottsbluff’s Anna Kelley. In order to determine a winner, they went into a scorecard playoff.

They went through the hardest handicap holes and went to the fourth hardest to determine who won. This happened to be the first hole on the course where Krzyzanowski had a birdie and Kelley with a par.

“I played pretty decent, it’s only the second tournament of the year so I could definitely improve a lot but putts didn’t fall,” Kelley said. “I hit the ball really well, I’ve been hitting it really well but I hope I can get my score down a little bit before state.”

Even though she plays for Gering now, Krzyzanowski said she was excited about how she played on this course.

“I do play this course all the time so it feels good to be able to play well on a course I’m so used to,” Krzyzanowski said. “I didn’t really think of (playing at her former school’s course) that much. I just try to play individually and try to do the best I can do.”

Kelley felt the same as her opponent but for her and the rest of the Scottsbluff team, they are on this course daily.

“It was good. I knew the greens, my team and I play here every day so we are used to it,” Kelley said. “We know to hit on neutral so it was a very comfortable round.”

However, it results in the team putting extra pressure on themselves when playing on their home course.

“It’s always exciting (to play at SBCC) but with excitement comes the fact that these kids are thinking about their best score that they’ve ever had out here or it’s their home course and they have fans and people around,” Scottsbluff head coach Brock Ehler said. “Sometimes, that’s the added pressure which I like especially right now because they learn to deal with adversity and how they can control their emotions. Inside your head is really the biggest game in golf, so I think they’re happy and we’re just happy for them.”

Following the first invite on Aug. 24, Ehler worked with the team to work on minor details he saw in Sidney prior to the Scottsbluff Invite. Not only did this help the team, but it also helped him as well in being a better coach for them, he said.

“I think most of the stuff were things that I needed to help them with. I learned what they need and about them as a kid. I mean you want to be consistent, yet everybody needs to be coached just a little bit differently and that’s how they find self-confidence,” he said. “I found some things to simplify the game and where I was making mistakes to be a better coach, so that’s helped me as much as anything. The girls are smiling now because they’ve just been putting the puzzle together.”

The next invite for Gering and Scottsbluff will be the Chadron Invite on Sept. 7.

Scottsbluff's Anna Kelley starts her swing on hole 14 during the Scottsbluff Invite on Tuesday.

Gering's Emily Krzyzanowski putting the ball into hole 18 at the Sidney Invite on Aug. 24.