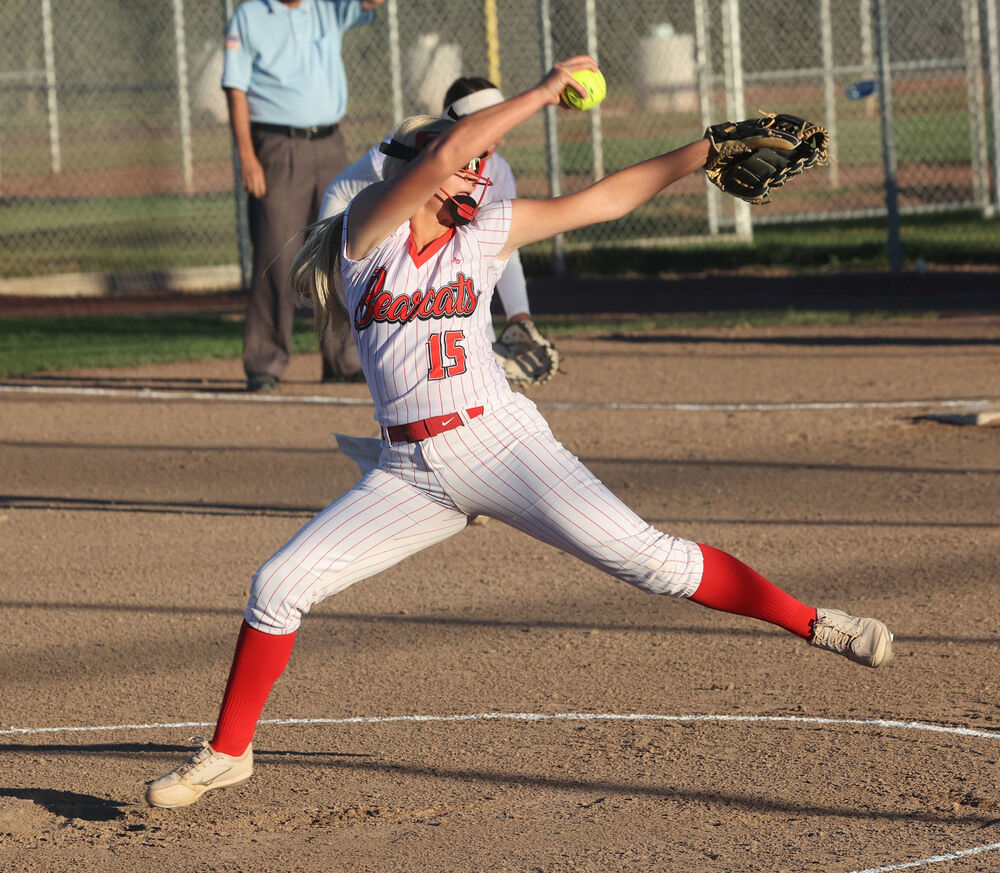 Aubrey Barrett threw a perfect game for the Bearcats, recording six strikeouts in the four innings. 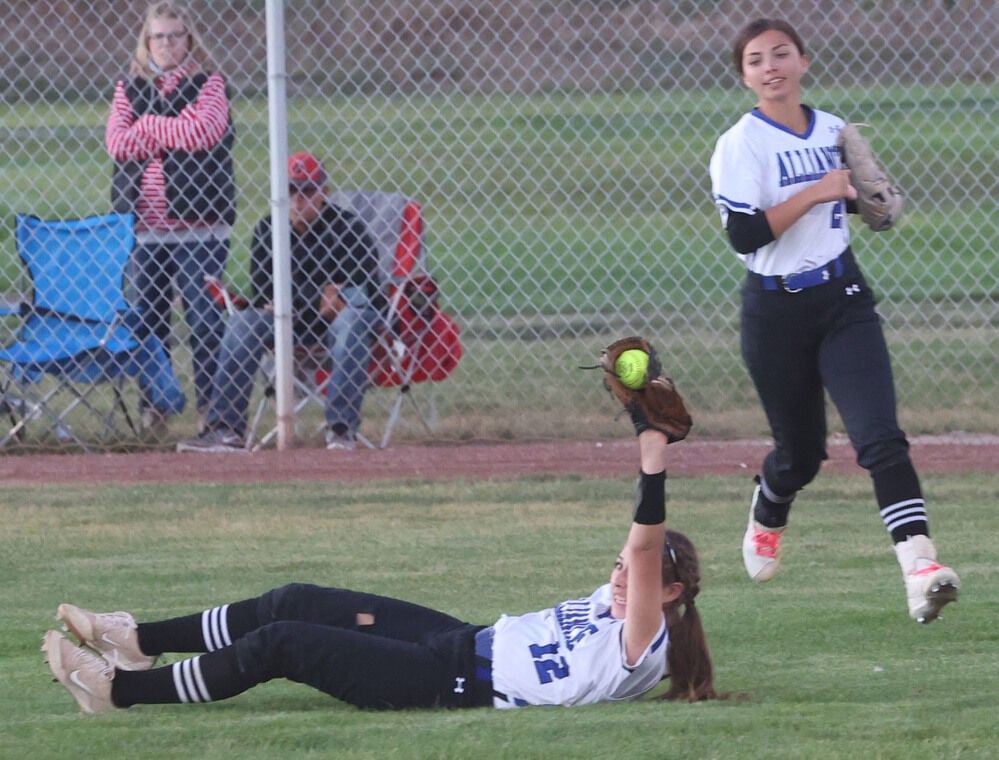 Bulldog Diane DuBray after making an incredible catch in the outfield in the loss to Scottsbluff.

The six seniors Brady Laucomer, Sasha Paez, Reagan Churchill, Jeca Anaya, Mariyah Avila, and Alex Jones were honored before the game for the contributions they have made to the program the last four years.

Churchill, though, had an even more important night. On top of it being senior night, she was also celebrating her 18th birthday.

“Tonight was very special for me because not only was I able to experience senior night in a very memorable fashion, I was able to celebrate my 18th birthday playing the game I love,” she said. “This is special to me because not many people can say they’ve celebrated their senior night and their birthday in the same night.”

Senior nights come with plenty of emotion before and after the game, and these six seniors handled it well on and off the field.

“This program has been such an amazing experience and it’s made such an impact on my life as not only an athlete, but a person as well,” Churchill said. “It’s very special to know that my fellow seniors and I have been part of changing the program for the better.”

The game itself was one where the Scottsbluff defense made some big plays in helping Barrett to the four-inning perfect game where Barrett faced just 12 batters and getting all 12 out, six via strikeouts or letting the defense do their part with groundouts and fly outs.

But Alliance also had some great defensive plays as well in the contest as they held Scottsbluff to just 10 runs in three at bats with 11 hits.

Scottsbluff scored six runs in the first inning. Avila led off with a double and then Jones walked. Laucomer then blasted the home run off the scoreboard for the 3-0 lead. After that, Taryn Spady singles followed by Tatum Heimerman earning a walk. Churchill then bunts and reaches on an error that scored both runs for a 5-0 lead. Zoey Paez finished off the scoring by singling to score the sixth run.

Alliance held Scottsbluff in check in the second inning with just one run on two hits. Spady singled and scored on a Sasha Paez single.

Scottsbluff put the game away with three in the third. Avila started things with a one-out double followed by Jones getting a single to score Avila. Laucomer made it 10-0 with a 2-run home run. Scottsbluff could have had more after Spady had a single, but Alliance center fielder Diane DuBray who made a diving catch for the third out.

The six seniors were remembered in the fourth inning as one-by-one they were taken off the field for an underclassman. That, along, brought tears to the seniors realizing that might be the last time they step foot on the Scottsbluff High School field as a team.

“Being taken off the field one-by-one was such a special experience and for it to take place in front of everyone who has supported us through our whole journey was a special feeling,” Churchill said. “Although a few tears were shed we all left the field knowing we’ve each made an impact on the Bearcat softball program in our own special way. I hope every underclassman has looked up to us and learned along with us.”

Laucomer said leaving the game like the seniors did was very surreal.

“That’s obviously super emotional because that had the potential to be the last time we ever step foot on that field together,” she said. “We’re all so proud of the underclassmen and are so excited to see them do their jobs.”

For Paez, leaving the field in the fourth inning was very emotional not only for the players, but also the seniors’ parents.

“I think everyone was sad when they watched us six walk off the field,” she said. “But, I think it was a good thing because we won’t be here next year and our season is coming to an end, meaning spots are needing to be filled. As a senior myself, it’s emotional walking off the field knowing my time is almost over. I’m thankful that I know the culture we have started is strong and it’s only going to get stronger with the underclassmen.”

As for the game itself, Laucomer said it was a complete team effort offensively and defensively.

“Everyone stepped up and did their job in every aspect of the game and that will be super important as we continue through the post season,” Laucomer said.

Paez said the defense did their job behind Barrett.

“We played amazing,” Paez said. “We backed up Aubrey as a strong defense as well as put the ball in play on offense. We racked up the bats tonight leading us to get the win.”

For Laucomer, she made what could have been her last game on the field a memorable one. The senior had two home runs, including a 3-run homer in the first inning that hit the middle of the scoreboard with a monster shot. She later had a 2-run shot in the third inning for two dingers on the night.

Laucomer holds the season and career home run records for Scottsbluff. The senior now has 12 dingers for the season and 29 for her 4-year softball career.

“It’s always super fun to play a game like that, especially on senior night,” she said. “I broke the season record with nine home runs my sophomore year and then I broke my own record this year. So, I have both the career and season home run records.”

Paez will remember these last four years of playing softball with a knowing of happiness.

“To be a part of this program has been great. This program is the definition of a team and not only that, but everyone is family. It’s a blessing to know that each girl on the team has my back on and off the field,” the senior first baseman said. “Our parents played a big part for us seniors. “They have been the biggest supporters and have made us to the young women we are today. They made our senior year special with the many surprises.”

Laucomer added that her time at Scottsbluff on the softball diamond has been special, from being the Star-Herald All-Region Player of the Year her freshman year to playing the last two years with her sister, Marly.

“I wouldn’t have wanted to complete my high school career at any other school with any other teams,” she said. “Everyone sees the success, and there was a lot of it, but there were some lows too and all of those experienced made me the player and person I am today.”

Aubrey Barrett threw a perfect game for the Bearcats, recording six strikeouts in the four innings.

Bulldog Diane DuBray after making an incredible catch in the outfield in the loss to Scottsbluff.