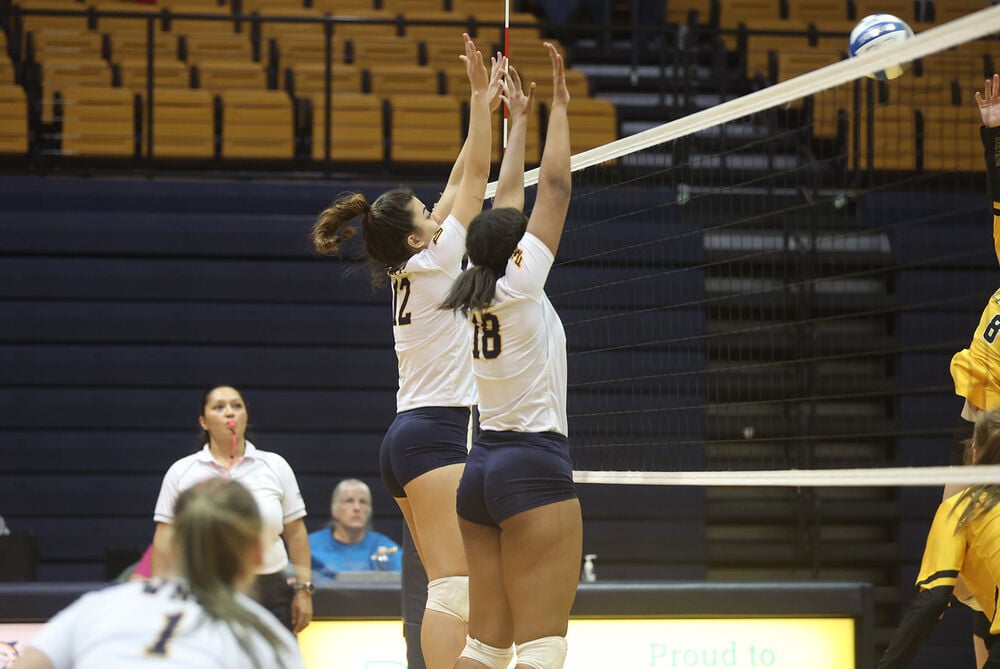 Andrea Sanjurjo (18) and Laura Milori (12) go up for a block against Eastern Wyoming on Tuesday. 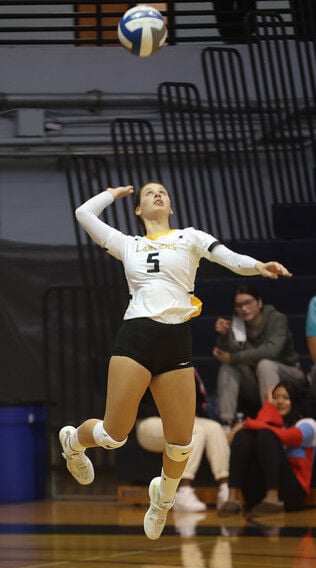 Ale Meoni serves to Eastern Wyoming on Tuesday at home.

The way the Cougars played Tuesday was a marked difference in the way they played a week ago in Torrington, Wyoming, when the Lancers topped the Cougars in four sets.

Alexis Keoho, a freshman from Hawaii, said this it was a big difference between matches from a week ago.

“I think the difference from tonight’s game from last week was we came ready and prepared,” Keoho said. “We expected nothing from the best from them and we knew they were going to come strong. But we just wanted to come stronger and play together.”

Tuesday night, Keoho said this team connected in all areas.

“I think if our team plays like this, we will be way more successful and we will play together more and put teams down faster,” the freshman setter said.

For Keoho, she got to do some late third-set setting and that was a special moment as her grandparents flew in from Hawaii to watch her play over the weekend and in this match. Keoho was teary-eyed after the match as she said goodbye to them after a few photos with her, them, and some other players.

“I got to go in today for my grandparents and show them what they came here for and give them a show,” she said.

WNCC did put on a show for Keoho’s grandparents as they clicked in areas, but the one area that really stood out was the many service runs that WNCC had that opened big leads.

The first set saw WNCC jump to a 4-1 lead behind three Curtis points and led 9-3 after four Hyleigh Fornstrom points. The Lancers battled back, slicing the lead to 10-9 on two points from Halle Hogan and trailed 11-10.

After a missed EWC serve, Moccellin went on a 5-point service run aided by four Curtis kills for a 17-10 lead. WNCC led 20-12 after two Macey Boggs points and won the first set 25-13 as Curtis hammered home a kill before serving the final four points.

The second set saw the Lancers jump out to a 3-0 lead behind two points from Neza Pec and led 4-1 on a kill by Makenna Reinert. EWC stayed in front at 7-5 on an ace from Alyssa George. Things changed after that as Fava hammered down a kill and then stepped to the service line for six points, including two aces for a 12-7 lead.

The third set was close at the beginning as the Lancers led 6-4 on a Hogan point. Fava came back with three points for an 8-6 lead. After the Lancers cut the lead to 8-7, WNCC came right back behind another 5-point service run by Moccellin for a 15-7 lead.

WNCC wasn’t finished as Boggs had three points for a 19-8 lead. EWC tried to come back, cutting the lead to 19-10 on a point by Vanja Tomic, but a missed serve put the serve into Curtis’ hands and the Ogallala native had three points for a 23-10, which included a kill by Jayla Brehmer. Mariah Fukumoto took over for Curtis in serving and had a point for a 24-10 lead.

EWC had one last chance and got three points from Gareth Bruce, but Brehmer finished off the match with a kill to give the Cougars the 25-14 third set win.

Curtis led the team in kills with 14 while Fava had 13 and Meoni finished with 10. Brehmer tallied two kills as well.

WNCC, 18-12, will be back in action when they hit the road this weekend when they face Otero College on Friday and Trinidad State College on Saturday.

“This weekend we will play like we did today and that is together and strong,” Keoho said. “We have to put forth all our effort and play for each other.”

Andrea Sanjurjo (18) and Laura Milori (12) go up for a block against Eastern Wyoming on Tuesday.

Ale Meoni serves to Eastern Wyoming on Tuesday at home.