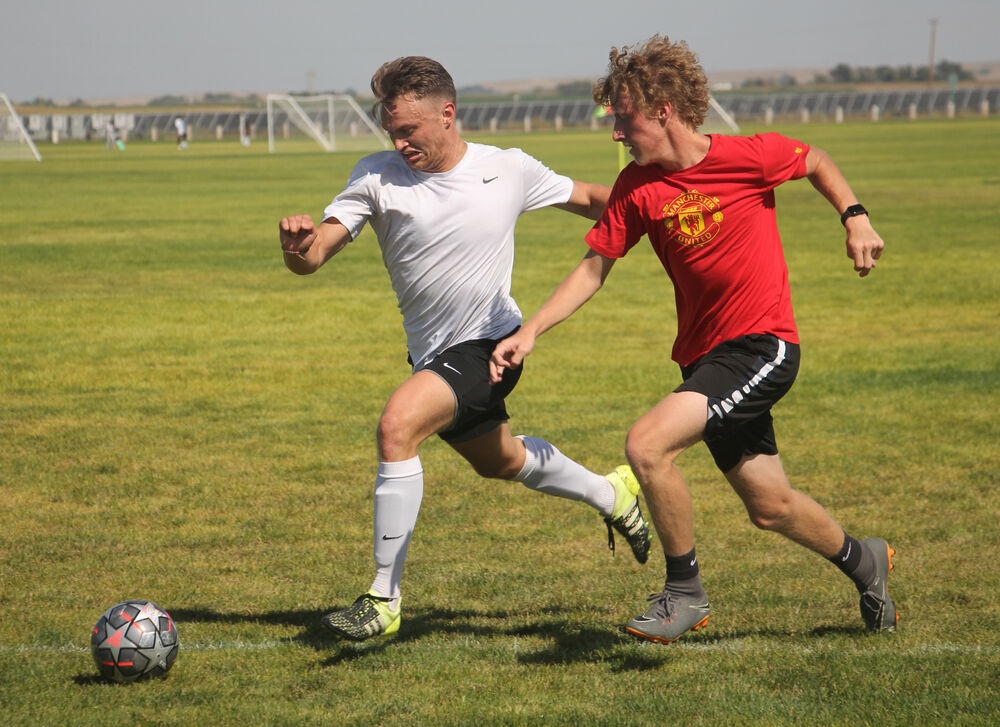 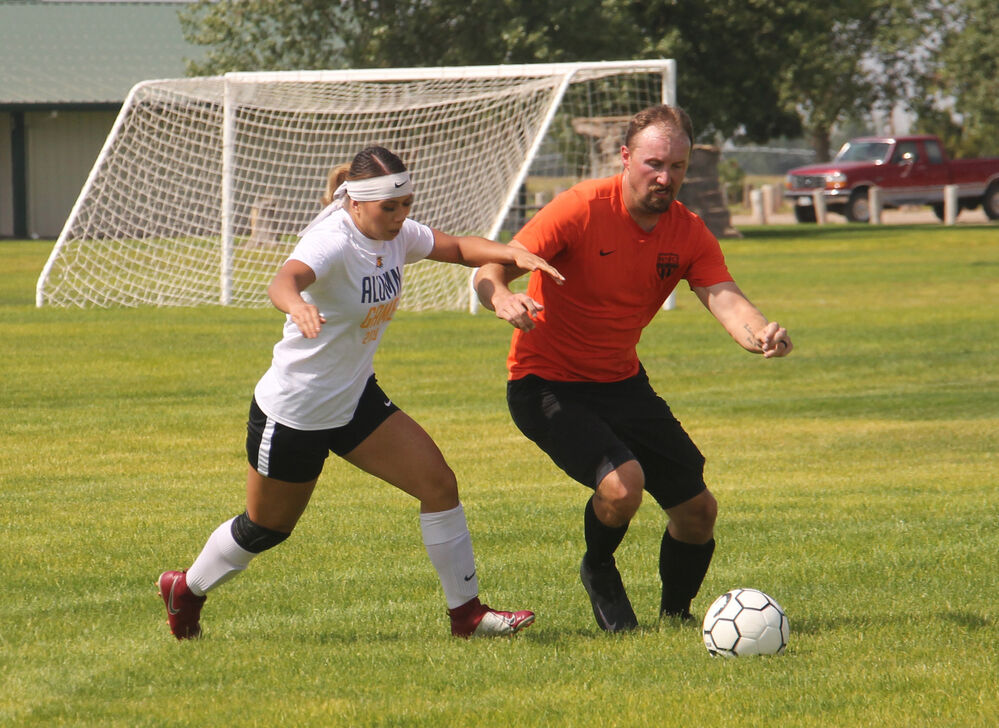 Noemi Amaro of the Russel team tries to get the ball away from attacking Monument Chiropractic player Kyle Cotton in the Russel's own territory. 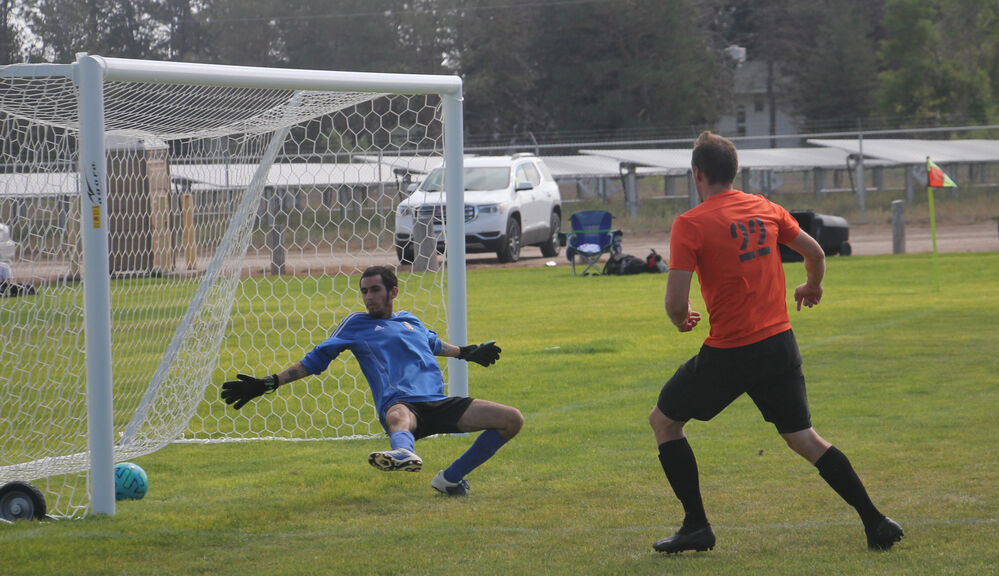 Kyle Cotton scores a goal on Marco Campos. Cotton's team ended up victorious in the first-ever game of the WNFC adult league.

Eight teams took to the pitch on Sunday, kicking off the inaugural slate of games for the Western Nebraska Football Club’s first-ever adult league. “Twenty years ago, you had trouble finding any adults who had played competitive soccer in the area,” Nate Rock, WNFC director, said via email. “Now with the club, the middle and high school programs along with the college, there are a lot of adults who still are interested in playing.”

Rock said the idea of an adult soccer league had been kicked around for a few years. The organization has featured youth soccer since 1992, and several of the adults are the parents of kids currently playing in the youth program. The league is designed to be as spectator-friendly as possible, with several players’ families and children cheering them on from the sidelines.

“We focused on providing the highest quality league we could,” Rock said. “Using club resources, we emphasized set rosters and consistent rules as well as quality facilities and fields.” In just a month and a half since registration opened, the league has amassed around 100 players across nine teams. “We were originally hoping for four (teams), so nine blows our expectations out of the water,” Rock said.

For many players, the league provides an opportunity to continue playing a sport they love with people they’ve been playing alongside for years. Plenty of them were on the Scottsbluff or Gering High School soccer teams, such as Bruno Flores of the Gunners team.

“I love the sport. It’s a fun environment to just play against a group of guys you grew up with,” Flores said. He said he also plays with the same team in a spring league, so this is an additional chance to hone his skills and build chemistry with the group. “I’m hoping we can do it all year round,” he said, adding that soccer is extremely popular in the Scottsbluff area.

The Gunners won their match against Rock’s team, Celtic, 14-4. Each of the 70-minute matches on Sunday were blowouts, with the winning team scoring goals in the double digits and the losing team scoring no more than four.

“We were just playing together growing up, so we just kept on doing what we were doing. We had good chemistry together already,” Jesus Duque of the Monument Chiropractic team said of his team’s capabilities. Duque actually had to play against his usual group because their opponents did not have any available substitute players. “Having subs when you’re playing in the heat is helpful,” he said. The Monument Chiropractic team won 11-4.

It’s one of the league’s sponsored teams, including the ninth team, Oregon Trail Eye Center, which has yet to play. The others include Inter, Dep Locomapa, King Cobras, Halcones, and Russel, the lattermost of which have half of their members with the eponymous last name.

While the teams were mostly color-coordinated, only Inter and Dep Locomapa had actual numbered uniforms, holdovers from the spring league they play in. The rest of the uniforms were scheduled to arrive before the games began, but shipping delays prevented that. “It is still a work in progress and, as with anything new, you learn a lot the first year,” Rock said of the league. A few players, including Rock and two members of the Monument Chiropractic team, also served dual roles as referees, for which they were paid as much as they would for officiating high school games. Rock said he would also like for some adult players to help coach the children’s teams.

The league will run through November, playing games every Sunday afternoon until a champion is crowned. It will not be the only new soccer series debuting at the Landers Soccer Complex, though. The WNFC is also putting together a new youth tournament, the Panhandle Cup. This tournament, which Rock said will have 30-40 teams involved, was rescheduled from late August until Oct. 2-3 due to shipping delays and a large increase in registrations.

The Coyotes fall to the Cody-Kilgore Cowboys in their first state title game in school history.

The Knights travel to Cougar Palace on Wednesday for the first matchup between the two teams in over a decade.

The Cougars come off the loss to EWC with a win over the Saints on Friday in the Wright Physical Therapy Shootout.

Noemi Amaro of the Russel team tries to get the ball away from attacking Monument Chiropractic player Kyle Cotton in the Russel's own territory.

Kyle Cotton scores a goal on Marco Campos. Cotton's team ended up victorious in the first-ever game of the WNFC adult league.