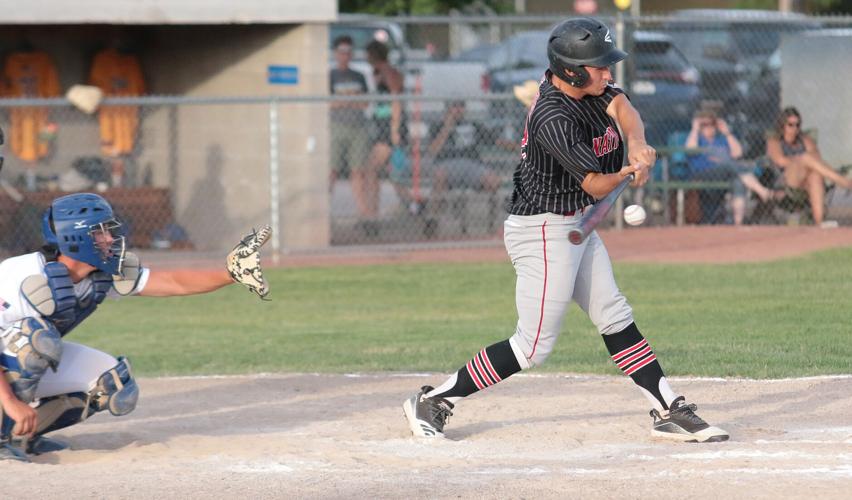 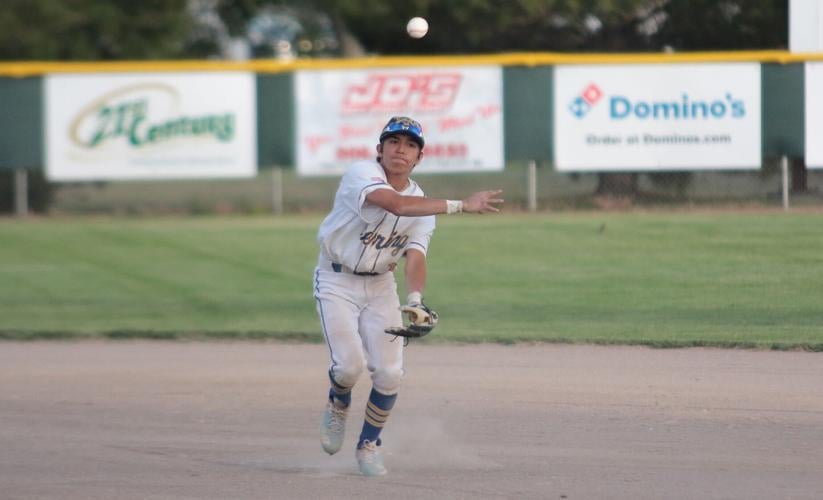 PVC’s Isaiah Murillo fields a ball and throws it to first base in Gering’s victory over Chadron.

Gering’s Dalton Wiese struck out seven and tossed a complete game in leading the Gering Platte Valley Companies team to a 7-2 win over Chadron Wednesday evening at Oregon Trail Park.

The contest was Chadron’s second game of the day as they competed in the Clair Conley Alliance tournament in the morning against the WESTCO Zephyrs, falling 10-3, and then traveling the Gering to complete the doubleheader.

For PVC, the win was much needed as they were shutout 8-0 at Gordon on Tuesday night.

Wednesday night, the Gering offense came ready to play as they scored single runs in the first and second innings for a 2-0 lead

Gering struck first with a run in the first as Jackson Howard and Wiese singled. Howard scored from third as Wiese stole second for the 1-0 lead.

The second inning saw Isaiah Murillo single and score from third after Mason Brumbaugh stole second for the 2-0 lead.

Chadron sliced the lead in half with a single run in the third as Garrett Reece singled and Dalton Stewart would score as Kobe Bissonette reached on an error.

Gering responded with four in the bottom of the third for a 6-1 lead. Tyler Garrett led off by reaching on a dropped third strike. Wiese then walked. Both Garrett and Wiese scored on a Carter Reisig double. Reisig would later score on a wild pitch. Chris Bliss would then walk and come around to score on a Mason Gaudreault hard single for the 6-1 lead.

Gering would plate another run in the sixth as Bliss tripled and scored on a Murillo ground out for the 7-1 lead.

Chadron added one more in the seventh as Cody Hall tripled and scored on a Noah Brown double with two outs.

Gering out-hit Chadron 6-4. No Gering player had more than one hit in the game. Reisig had two RBIs with a double, while Bliss had a triple and scored two runs.

Chadron had four different players finish with a hit. Brown had a double with a RBI while Hall had a triple with a run scored.

The junior game was all Gering as the B&C juniors scored 10 times in the first inning and added one in the second and four in the third for the run-ruled win in three innings.

Gering scored 10 times in the first inning on eight hits. Kelan Dunn had the only extra base hit in the inning as he doubled home Murillo to make it 9-0 with just one out.

Gering added a single run in the second to make it 11-0 and then put the game away with four in the third as Murillo had a 2-out double that scored Ethan Prokop and Dominic Mendez with the game-ending runs.

Murillo led the juniors in hitting with three hits including a double, two RBIs, and two runs scored. Dunn had two hits with a double and two RBIs. Lukah Schwery had a hit with two RBIs, while Barron Williams and Dominic Mendez each scored two runs. Ethan Prokop had two RBIs.

Chadron’s Trey Williamson had two hits while Kobe Bissonette had a hit.

Both Gering teams came away with wins over Chadron as B&C gets a shutout and PVC's Dalton Weise pitched a complete game.

Putting it all out on the pitch

Bearcat Shae Willats began playing soccer at a young age and has since put everything into it.

The Cougars women's basketball sends record seven players to the Division I level.

Bearcat Braden Anderson started playing soccer after watching the two people he looked up to the most play, his brother and uncle.

Alliance earns come back win over York to end the third day of the Clair Conley Tournament.

The Gering Legion baseball teams split with the Gordon Legion teams, with the Gering juniors winning and seniors losing.

Express close out tourney with win over Bridgeport

Alliance, WESTCO, Torrington all win games on Saturday at the Clair Conley Tournament in Alliance.

Pioneers get series win over Spuds

CSC athletic camps have attracted many this summer

U.S. swimmer rescued by coach after fainting at world championships

PVC’s Isaiah Murillo fields a ball and throws it to first base in Gering’s victory over Chadron.