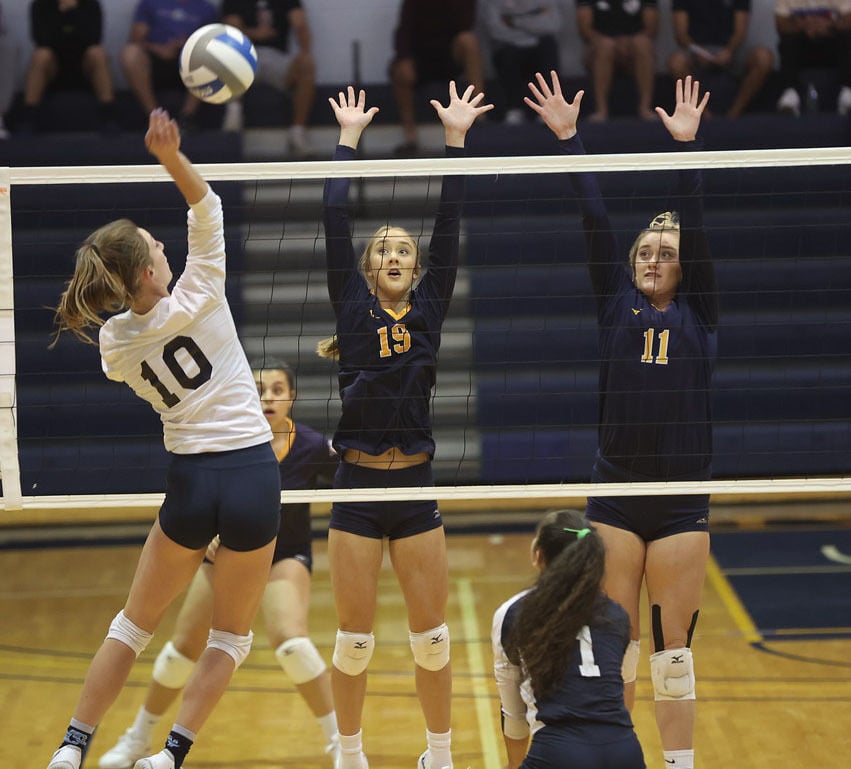 Jenna Curtis (19) and Hyleigh Fornstrom (11) go up for the block against Otero's Linsey Whipple on Sept. 24. 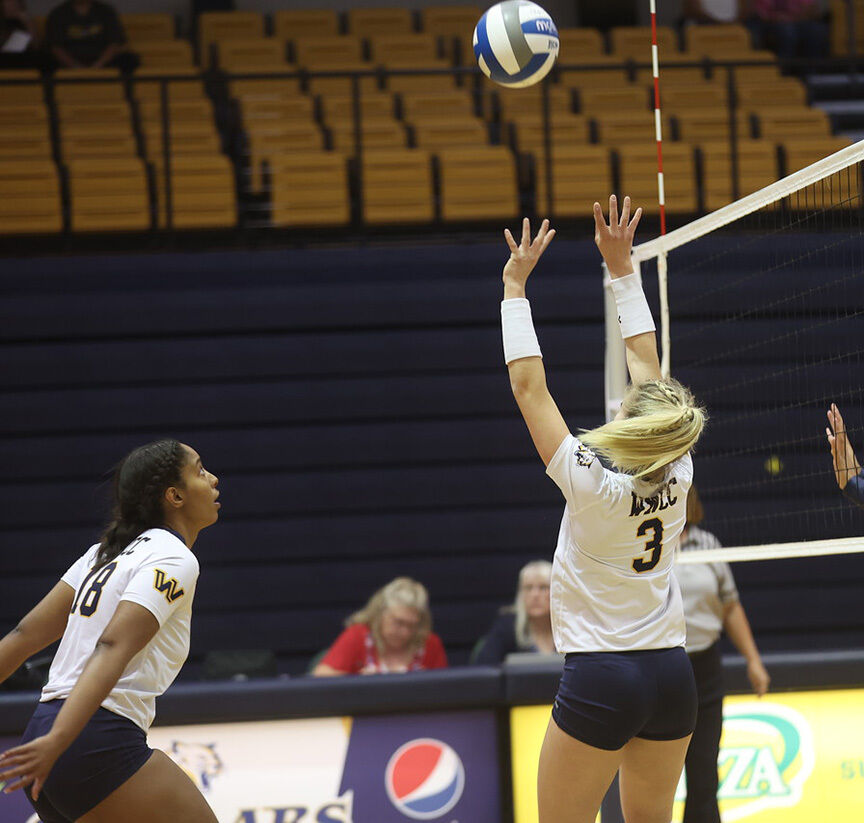 Macey Boggs (3) sets up a kill for Andrea Sanjurjo (18) in Saturday's match against Trinidad State.

The 20th-ranked Western Nebraska Community College volleyball team rebounded with authority on Saturday after falling to Central Wyoming College on Friday, with two wins over Casper College and Western Wyoming Community College to finish the Wyo-Braska Invite with a 3-1 record.

Ale Meoni, who was celebrating her 18th birthday on Saturday, said the team did well on Saturday and rebounded from Friday’s loss. After the win against Western Wyoming, the team sang happy birthday to the Cougar freshman.

“I think we played well, not to our maximum, but it still was pretty good,” Meoni, who grew up in Italy and graduated high school in Houston, said. “We were just trying to focus on the games today and leave the game yesterday [Friday] behind and keep going and play.”

A big change in play was a change in the lineup as Jenna Curtis was playing on the right side and Juliana Oliveira moved to the outside. It paid off as Curtis and Oliveira upped their kills and hitting percentage.

“Since the rotation didn’t work yesterday, we were trying to find something new and Coach Binny came up with Jenna [Curtis] as a right side and Juliana [Oliveira] as an outside,” Meoni, who is a left-handed right side hitter, said.

Curtis finished with 10 kills in the win over Western Wyoming and nine against Casper. Oliveira had nine kills against the Mustangs and seven against the Thunderbirds.

In the win over Western Wyoming, the birthday girl Meoni led the way with 13 kills, followed by Curtis’s 10, and then Oliveira and Erica Fava with nine each.

In the win over Casper, Fava led the way with a triple-double of 19 kills, 20 digs, 11 points, and two aces. Meoni finished with 11 kills in the match, followed by Curtis’ nine kills, Oliveira’s seven, and Fornstrom with five.

The two wins move the Cougars to 11-8 on the season as they get ready to play four matches next week. WNCC travels to face Casper on Tuesday and then comes home to host Northwest College on Thursday, Otero Junior College on Friday, and Trinidad State College on Saturday.

The Bearcats finish their season at state after losing to Elkhorn in the second game on Thursday.

Here you will find the prep scores from around the area for football and volleyball on Oct. 15.

Here are the prep scores from around the area for Thursday, Oct. 14.

WNCC wins its third straight and 20th win of the season on the road against Trinidad State College on Saturday.

Jenna Curtis (19) and Hyleigh Fornstrom (11) go up for the block against Otero's Linsey Whipple on Sept. 24.

Macey Boggs (3) sets up a kill for Andrea Sanjurjo (18) in Saturday's match against Trinidad State.