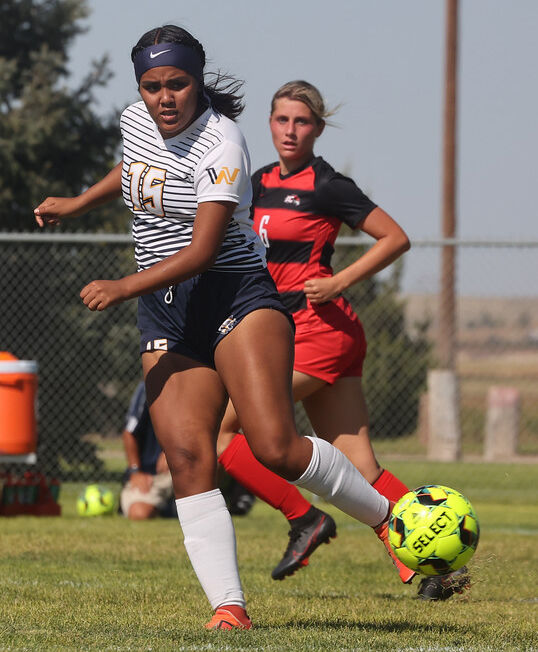 Jackie Valenciano kicks the ball during the game against Casper on Spet. 15. 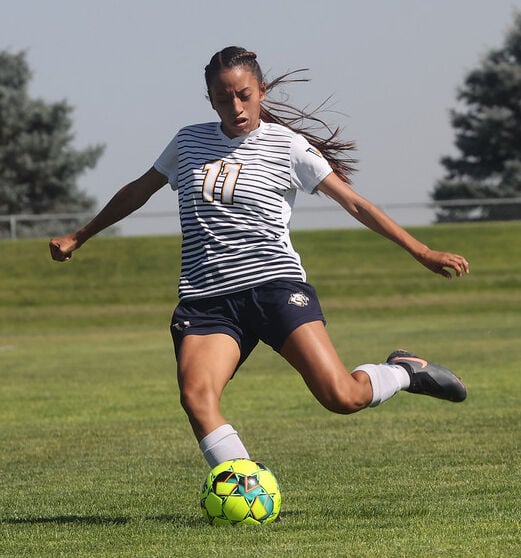 The Western Nebraska Community College women’s soccer team gave up two early goals and then couldn’t find the back of the net themselves in falling to Casper College 4-0 in a Region IX conference contest at Landers Soccer Complex Wednesday.

The Cougar women actually had the first chance to score as Izzy Wright just missed on a shot with 34 minutes left in the first half.

After that the Thunderbirds, who defeated nationally-ranked Laramie County Community College last week, scored first as Alyssa Seaich scored off a corner kick from Danielle Greminger for the 1-0 lead with 29:08 to play.

Three minutes later, Ashley Ruiz had a shot to tie the match but the shot went right to the Casper goalkeeper. That set up Casper’s second goal as Seaich scored an unassisted goal to make with 2-0.

WNCC kept fighting to score before halftime and Leticia Heemann had the best chance to score in the first half, but it was saved with 23:18 to play. Casper went into halftime ahead 2-0.

The second half saw Casper go up 3-0 just 10 minutes into the contest as Seaich made a pass to Sydney Hiatt who found the back of the net.

WNCC had another prime chance as a cross by a Cougar player was in line to be scored, but the shot was just off target with 22:40 to play.

After a water break with about 21 minutes to play because of the heat, Vanessa Vasquez had a shot that missed with 13 minutes to play and then Izzy Wright had a long shot that went just high as it seemed as if it would come down in the top 90 of the net.

Casper capped off the scoring with 8:05 to play on a nifty pass from Sofie Pinegar who found Lara Lopez for the goal.

WNCC had just five shots in the game while Casper had 10. Casper had three corner kicks while WNCC had zero.

WNCC will be back in action Saturday for the final regular season home match when they face NJC at 2 p.m. at Landers Soccer Complex.

Nielli Heinold and Scottsbluff in striking distance of state title

Nielli Heinold in third for the individual title while her team is also in third after day one of the Class B State Golf Tournament.

The Chadron State football team was unable to hold of the CSU-Pueblo ThunderWolves in loss on Saturday, Oct. 9.

After day one, Kimball and Mitchell each have an athlete in the top 10 of the Class C State Golf Tournament.

Almost 10 years to the date that the Scottsbluff Bearcats softball team last made the State Tournament, they are heading back after beating th…

The Mitchell volleyball team beat the Alliance Bulldogs and Scottsbluff Bearcats at home.

Jackie Valenciano kicks the ball during the game against Casper on Spet. 15.