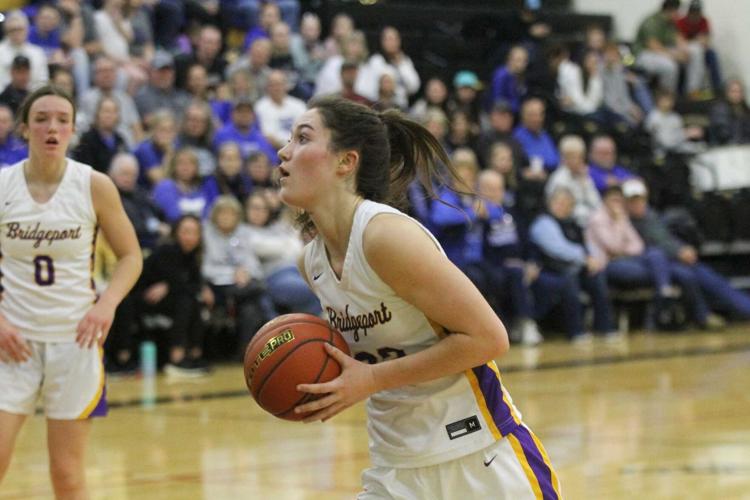 Bridgeport's Ruthie Loomis-Goltl drives to the basket during the Bulldogs' win over Hershey in the SPVA Tournament finals on Saturday at NPCC. 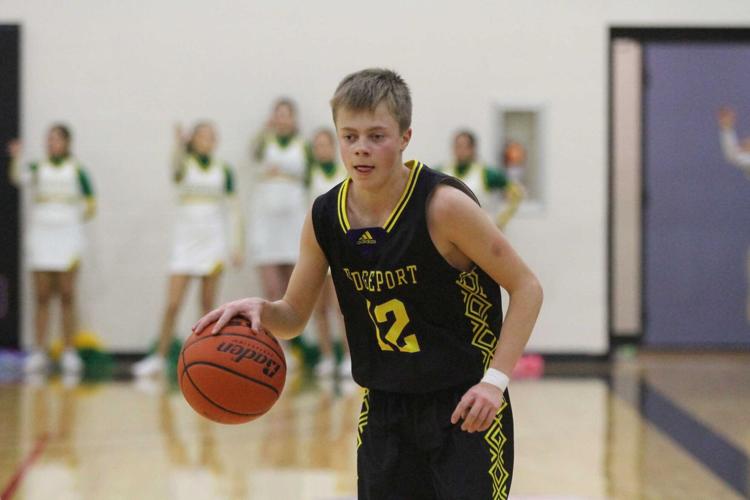 Bridgeport's Gage Nein dribbles during the Bulldogs' loss to St. Pat's in the SPVA Tournament finals on Saturday at NPCC.​

Her 40 points also played a major role in helping the Bulldogs defeat Hershey 85-41 to win the SPVA Tournament on Saturday at NPCC.

“She’s the best player we’ve ever had, so it’s kind of fitting that she got it,” Bridgeport coach Dave Kuhlen said. “It’s not anything that we planned. It just kind of worked out the way it did. I’m happy that she got it. That’s why I left her in to get it, because she’s such a great role model to every single kid in our school and a tremendous person, and she deserves everything that comes her way.”

“They played great,” Kuhlen said. “Hershey has an outstanding record, so we knew they would be here to battle, and they were. The girls really stepped up and did everything that I asked of them.”

Hershey held a brief lead early after Hall made a basket for a 2-1 lead. Bridgeport responded with an 8-0 run to jump out to a 9-2 lead.

Hershey later cut the deficit to three at 10-7 off a Hall 3, but Bridgeport once again answered with a lengthy run to extend the Bulldog lead to 19-7 going into the second.

The Panthers had one more push to try and keep the game close, scoring the first seven points of the second quarter to pull to within five at 19-14, but Bridgeport went on a 13-0 run to go up 32-14.

The Bulldogs went into halftime with a 40-20 lead. Hershey came out of the break and scored 14 points in the third, but Bridgeport outscored them with 17 to push the lead to 57-34.

Will Moats led the St. Pat’s boys basketball team with 17 points as the Irish defeated Bridgeport to win the SPVA Tournament on Saturday at North Platte Community College.

“I thought our effort, focus and frankly execution was all really outstanding,” St. Pat’s coach Bill O’Malley said. “We have a great group of kids, and they played really well.”

“I thought we did a good job of getting to loose balls,” O’Malley said. “I thought we pressured the ball really well and got the ball in good spots to score. We didn’t have to rely on a lot of jump shots.”

The Irish never trailed and used a strong first quarter to set the tone for the rest of the game. St. Pat’s scored the first seven points of the game then, after trading baskets with Bridgeport, went on an 8-0 run to take a 17-3 lead. The Irish led 17-6 heading into the second.

“They did a decent job of taking care of the ball, but I did think we made it pretty difficult for them to get open looks,” O’Malley said. “And they got really good shooters. We knew we were going to have to be disciplined in getting closed out because they have a number of guys that shoot the ball really well.”

St. Pat’s bumped that the lead to 24-6 after scoring the first seven points of the second quarter. The Irish later took a 32-17 lead into halftime after outscoring Bridgeport 15-11 in the frame.

St. Pat’s defensive effort took over in the second half, holding Bridgeport to a game-low five points in the third quarter and nine in the fourth.

The Irish, meanwhile, scored 16 in both quarters to close out the game 64-31 and take the SPVA championship.

“We’ve got some guys that are very quick and good guarding the ball,” O’Malley said. “(Bridgeport) didn’t turn the ball over that much, but I thought the guys did a good job of keeping the ball away from the basket.”

"It's your hopes and dreams coming true, but it's your worst fears," Donna said. "Somebody is going to go home a loser, and neither one of them lose very well."

The Bearcats girls got balanced scoring from eight players, with just one in double figures. The Scottsbluff boys held Mitchell to 10 first-half points.

Two longtime members of Nebraska football’s medical and training staff are no longer with the program.

Reed Emsick and Tanner Nielsen were in street clothes for Omaha Burke on Saturday. Their violation? They played Thursday for Burke’s unified basketball team in a Special Olympics Nebraska tournament.

Olympic freestyle skiing champion Eileen Gu crashed during practice for the Winter X Games and said she suffered a bad ligament strain in her knee that forced her to miss the contest. Gu posted on social media that she “had a heavy crash” during practice Friday and that results of an MRI showed “a bad MCL sprain, ACL strain and bone bruise.” Gu who won twice in Canada last week and has not lost a halfpipe contest since early 2021. She watched Saturday night's halfpipe action from the crowd. Zoe Atkin of Britain took the gold. Gu had also been expected to compete in slopestyle but will sit that one out, as well.

The statement comes after the NSAA made two Omaha Burke boys basketball players sit out one game for playing in a Special Olympics basketball game on Jan. 26.

Bolstered by a pair of individual champions and five runner-up finishers, the host Tigers piled up a winning score of 155 to finish on top in the boys division.

The Bulldogs girls ended the game on a 38-4 run to improve to 15-0 on the season. Chadron boys outscore Bridgeport 13-5 late.

7 things we learned this week in Nebraska football

From snagging more commitments to Matt Rhule's vision for the program's rebuild, here's what we learned this week in Nebraska football.

Mahomes and Hurts to make history at Super Bowl LVII

Mahomes and Hurts to make history at Super Bowl LVII

Bridgeport's Ruthie Loomis-Goltl drives to the basket during the Bulldogs' win over Hershey in the SPVA Tournament finals on Saturday at NPCC.

Bridgeport's Gage Nein dribbles during the Bulldogs' loss to St. Pat's in the SPVA Tournament finals on Saturday at NPCC.​