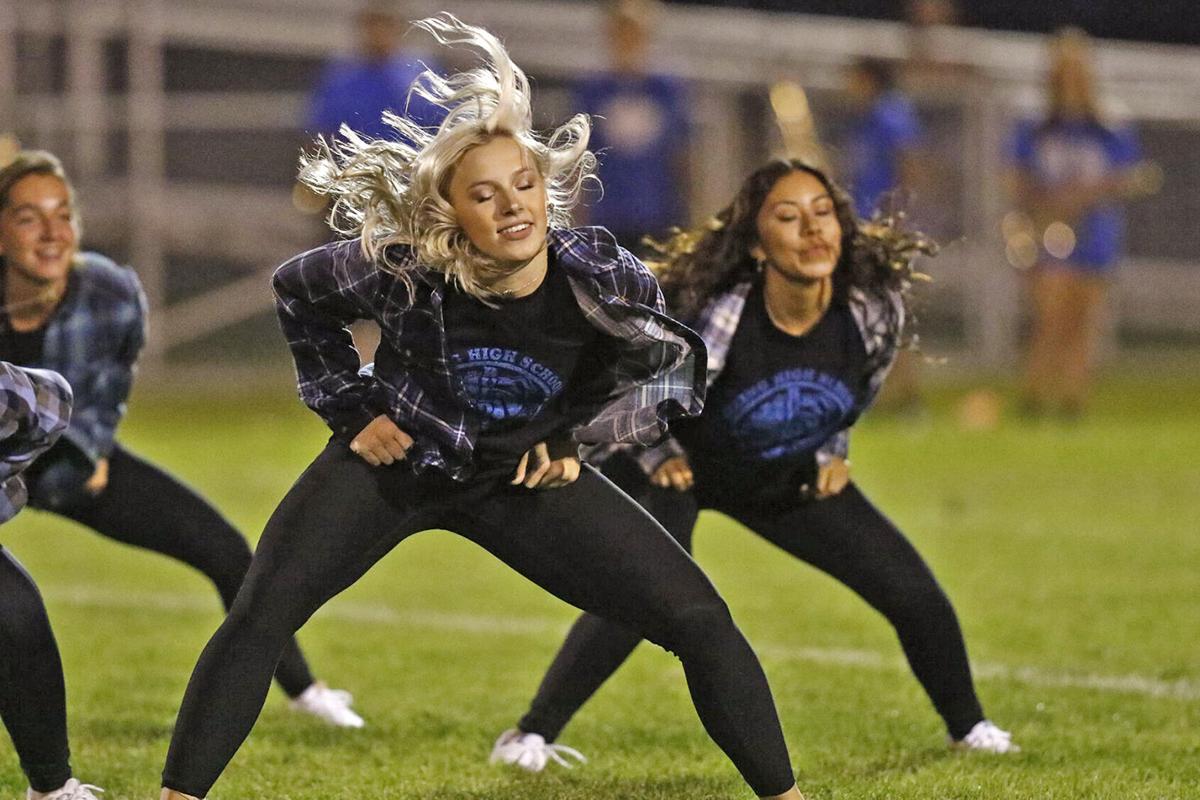 Kennie Gable and the Gering POMS team performs at halftime of Gering's football game against Grand Island Northwest on Sept. 4, 2020.

The Sidney dance team performs at the Nebraska State Cheer and Dance Championships in Grand Island in February. 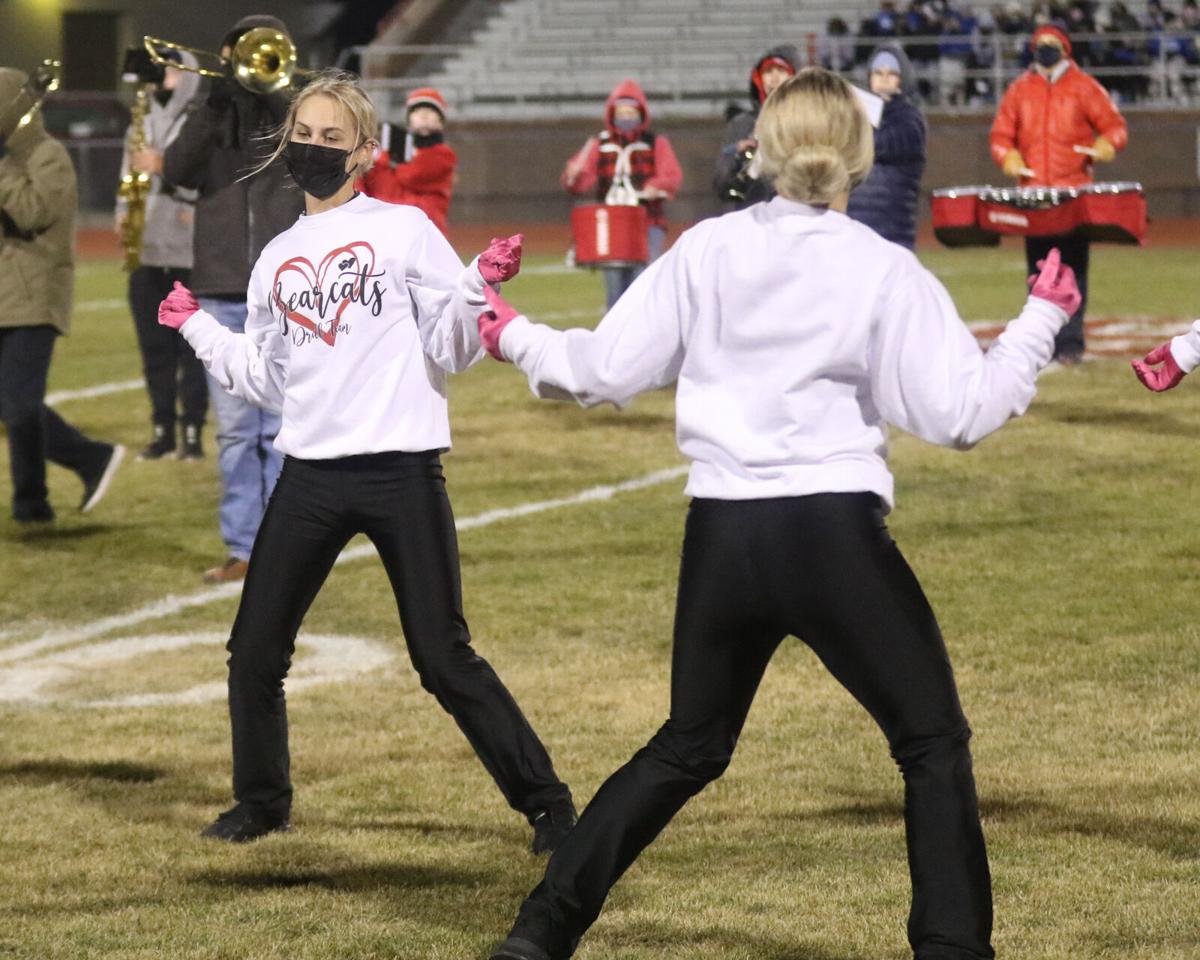 The Scottsbluff drill team performs at halftime of the Bearcats game against Gering on Oct. 24, 2020.

Area schools represented the Panhandle well at the Nebraska State Cheer and Dance Championships in Grand Island in February.

Sidney earned a first place in Class C1 in the high kick competition with a score of 75.1, and took third in hip hop with a 76.

Raiders sponsor Michelle Weimer said she wasn’t sure what the competition would be like after moving down a class.

“It’s been hard (in past years), because we’ve always been class B before. This is our first year in Class C1, so we didn’t really know what to expect,” Weimer said. “We just didn’t even really know what we were up against competition-wise.”

Going into the championships, Weimer said she and her team weren’t expecting to do better in high kick.

“If you would have asked them before we went to the competition, they would have thought we had a stronger chance of (finishing first in) hip hop than we did high kick. I think it was kind of a fun surprise.”

Sidney turned in a top notch performance during the high kick competition.

“When they got on the floor, they truly they nailed the routine,” she said. “It was the best they’d ever performed it, and they did a fabulous job.”

Weimer said her team was lucky that they were able to practice during the pandemic, which was a big boost for the Raiders dance team.

“We had tryouts so early last year that we finished the Thursday right before everything closed down for COVID,” Weimer said. “We were actually able to have our team tryouts the way we usually do, which was great. Our team practiced through Zoom from April until June. We did Zoom practices, which is tricky because left is right when you’re watching the screen. Space-wise people were in their basements and garages and on the sidewalks. It was challenging. It was a little bit of a shock when we could actually all get back together.”

Sidney senior Elly Weimer is hoping to continue her success in college after signing a letter of intent to dance at Doane College.

“We made college visits two years ago in the spring,” Weimer said. “We went and looked at Wesleyan, UNO and Doane. We also looked at Wyoming, because that’s where she really thought she wanted to do what she loves to do. The minute she stepped on the Doane campus, she loved it. She was able to practice with the dance team, and sing with the choir. She actually is going to be on scholarship for choir and for the dance team, as well.”

The Scottsbluff Drill Team finished second in high kick in Class B with a score of 78.8.

Bearcat sponsor Angie Hinze said her team knocked their routine out of the park.

“Tiffany and I were so proud of the girls. They executed their routine without any mistakes. They looked great. They did a great job. We couldn’t have asked for anything more,” she said.

Hinze said choreographer Tiffany Tabor-Mackrill is a big part of the team’s success.

“Tiffany does a great job. She does a lot of musical theater-type choreography,” she said. “(This year’s routine) was similar to what we’ve done in the past, but she also changed it up.”

Hinze said she couldn’t have asked anymore of her team.

“Tiffany and I made it very clear to the girls that we were so proud of them because they worked hard,” Hinze said. “They did what we asked them to, and they performed a fabulous

Also placing in the competition was the Gering POMS team, who took second in Class B hip hop competition.

Gering POMS sponsor Hollie Williams said her team did well, especially after facing some adversity before heading to the state competition.

“It was actually a pretty wild 24 hours leading up to (the state competition),” she said. “We had a couple people get sick and had to rearrange formations.”

Williams said most of the drama revolved around team members being ill.

“We had a kiddo who just got (off quarantine for COVID-19). When she came back to practice we redid things to put her in. We were ready to go, then we had another kiddo get sick, so they missed the day before practice,” she said. “The day that we left (the girl who was quarantined previously) tested positive for COVID.”

Williams said all of the last minute changes left the team scrambling.

“In about 24 hours, we had several formation changes,” she said. “One girl was dealing with strep. We were just trying to get down there to the state competition). By the time we got down to Grand Island, it was 10:45 at night. We had practice at 11 o’clock that night, and tried to figure some stuff out. We were up till midnight trying to work with this little area in the pool area at the hotel.”

Things still weren’t going smoothly for the team the next day, Williams said.

“The next morning we got up and we’re like, ‘OK, maybe we can run through the whole thing full outright before we go on.’ When we got to the Heartland Event Center, you have about five minutes with a stage that you can practice on. That was when one of the girls practiced her flips for the first time. So, our true full-out, run-through was about five minutes before. The girl that was doing the flips kind of started to get overheated had to go outside and she’s asthmatic. It sounds super dramatic, and, I promise you, it absolutely was.”

With a team member who couldn’t be there and all of the formation changes, the POMS team felt a little out of sorts.

“We didn’t feel like we were a whole team because one of our teammates had to stay home due to COVID and with all the change. It was like, ‘OK, let’s give it all and lay it all out there.’ They absolutely performed better than I’ve ever seen them. It was the best that they’d ever performed it.”

Going into the their turn to perform, Williams said her team just wanted to perform its best.

“It was either gonna be like first or last. Not to quote ‘Talladega Nights,’ but it definitely was OK. Either, we’re going to get a really good score, or we’re gonna tank it,” Williams said.

The team definitely didn’t tank. The team’s performance landed them the second place finish in the hip hop dance category.

Williams said the state competition was a great atmosphere for the team to take in.

“The crowd was just so energized. The families went down to support, and some of them brought their big heads (large cutouts of their kids faces). They were screaming and hollering,” she said. “For some of the parents, it was the first time that they saw their routine. Afterwards, the parents came up and they’re like, ‘Oh my gosh, that was awesome.’ That was so cool. Even the crowd around us thought it was so entertaining.”

The Leyton boys and the Burns, Wyoming, girls claimed the team titles at the Bayard C-D Invitational on Saturday.

MITCHELL — The Sidney girls and boys ran away with the team titles at the Mitchell Track and Field Invitational on Thursday.

The WNCC volleyball team heads into the national tournament seeded ninth. The Cougars will take on Blinn College on April 15 in West Plains, Missouri.

Playing in a bowl game would've been the right thing to do for Nebraska's program, Deontai Williams says.

In five days, the Nebraska volleyball team will enter the volleyball bubble in Omaha. Here's what the Huskers will be up to when they aren't playing.

Husker volleyball notes: With a few wins Hames sisters would face off in NCAA Tournament

Nebraska and Pepperdine are in the same region and could face off in the third round, pinning the Hames sisters against each other on a big stage.

WNCC women fall to Casper in semifinals at regionals

Steven M. Sipple: If NU is looking for leaders, it may do well to start with its fatherly safeties

Safeties Deontai Williams and Marquel Dismuke surely are among the strongest leaders on Nebraska’s roster. Listen to them. They just have to be.

In last year's finale, the Huskers started three freshmen on the offensive line for the first time ever. The team rushed for 365 yards.

'Thought that was it': Runner recalls Boulder store shooting

Kennie Gable and the Gering POMS team performs at halftime of Gering's football game against Grand Island Northwest on Sept. 4, 2020.

The Sidney dance team performs at the Nebraska State Cheer and Dance Championships in Grand Island in February.

The Scottsbluff drill team performs at halftime of the Bearcats game against Gering on Oct. 24, 2020.