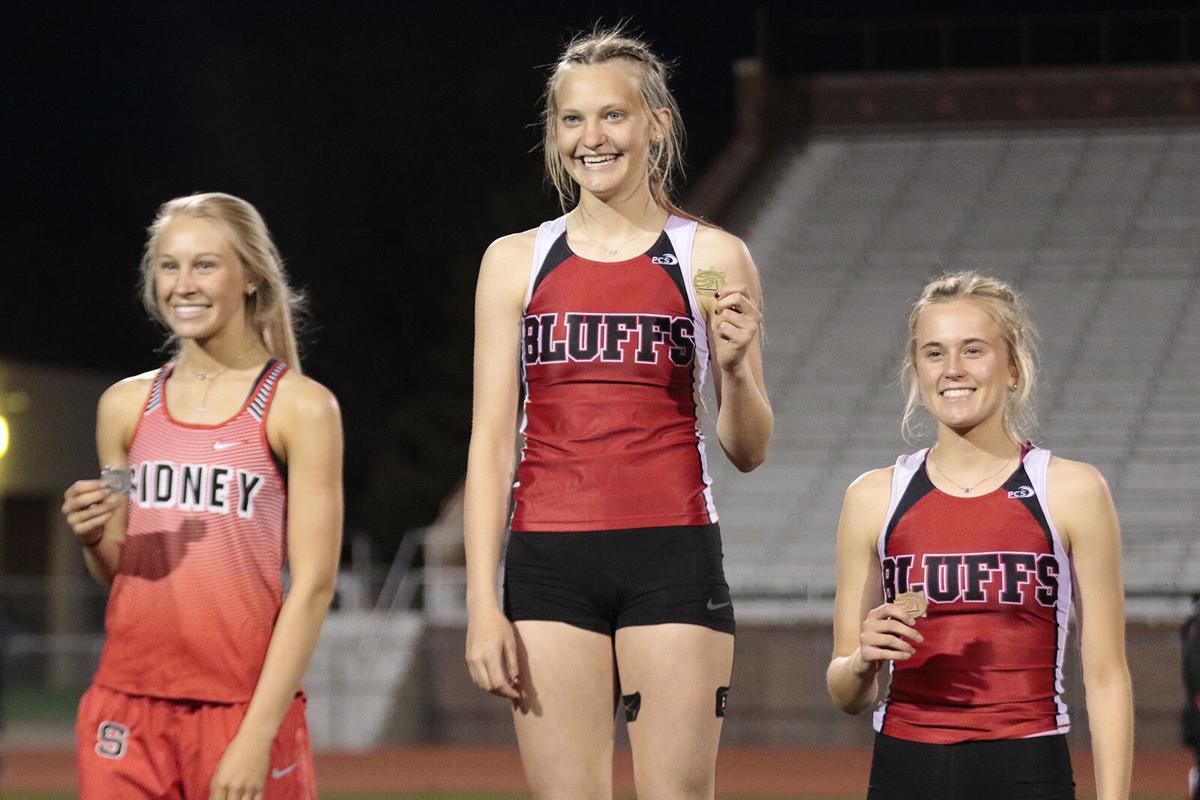 Scottsbluff's Paige Horne holds up the gold medal she won in the 300-meter hurdles at the Best in the West Invitational on Monday, April 26 in Scottsbluff. 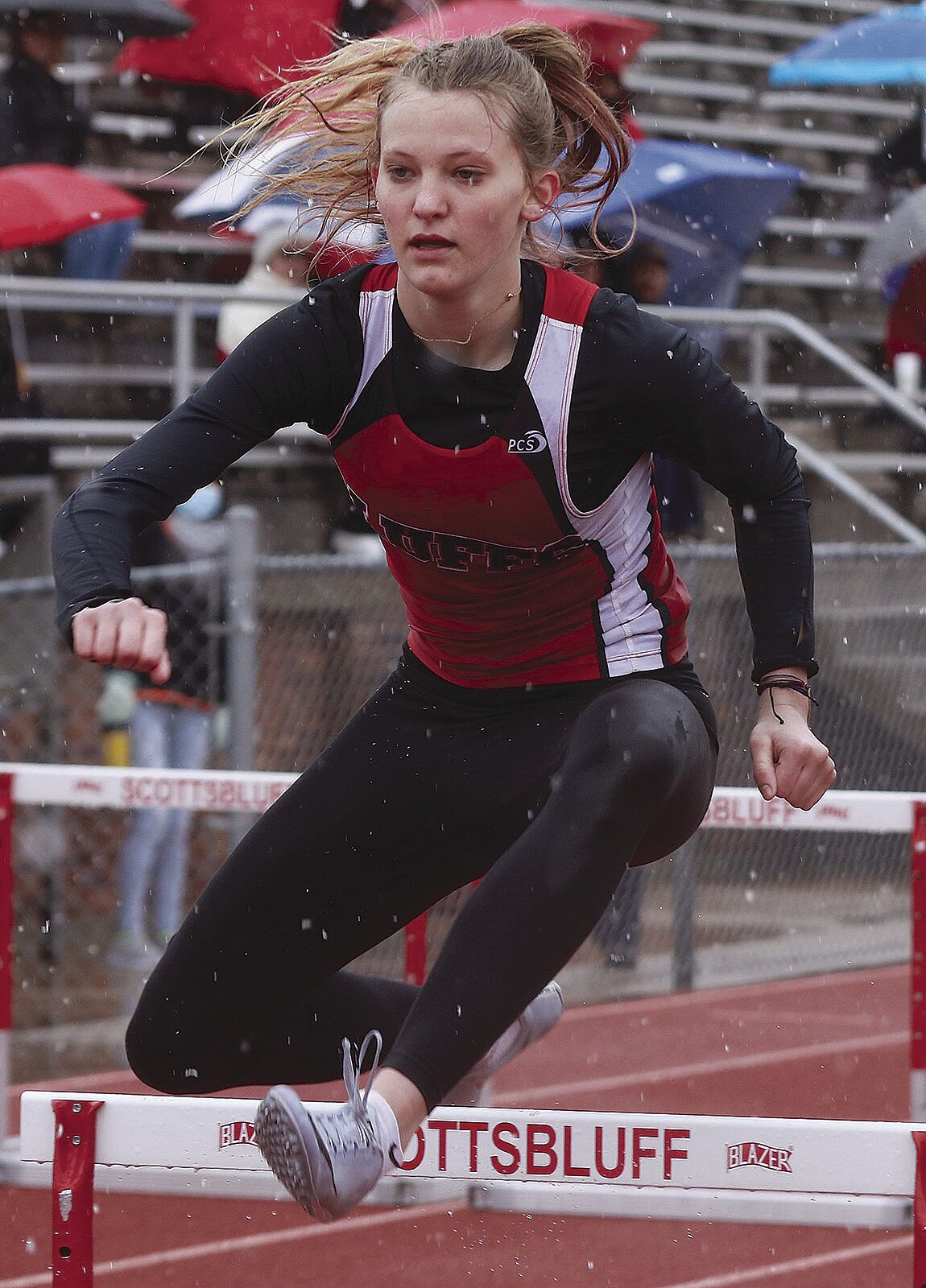 Paige Horne competes in the 100-meter Hurdles at the Binfield Invitational on Friday, March 26 at Bearcat Stadium in Scottsbluff.

Having missed her eight-grade season, Scottsbluff High School hurdler Paige Horne said she went into her freshman season not sure what to expect when she finally got to hit the track.

“I was really nervous and confused, because I didn’t know if the height change on the hurdles would affect how I ran, or if I still had the speed I had,” she said.

Horne said she was still able to put in some work last year during the pandemic with the help of her stepmom Becky Horne, who was a standout athlete in basketball and track and field at Gering High School.

“My stepmom has been a really big help. She taught me what to do, and with the help of Coach (Faith) Mullen and Coach (Linda) Meininger, they really helped me get to the next level,” Horne said.

Horne said her times are better than what Becky Horne’s times were in high school.

“She’s not too happy about it,” Horne said jokingly.

After a stumble in the preliminaries of the 100-meter hurdles at the Binfield Invitational, Horne has been nothing short of phenomenal during her freshman season.

Horne went on to win the 1oo-meter hurdles after posting a time of 16.10 in the finals at the Binfield Invite, and hasn’t looked back.

On Monday, April 26, Horne continued to wrack up honors winning both the 100 and 300 hurdles at the Best in the West Invitational.

Horne posted a personal record time of 15.33 in the 100 hurdles, and had a time of 48.11 in the 300 hurdles. She sits in fourth place on the Omaha World-Track and Field Class B Leaders chart published on April 26 in both the 100 and 300 hurdles. She could climb in the next leaders chart for the 100 after setting new personal best time of 15.6 in the 100 hurdles at Best in the West meet.

“We had a pretty good feeling about her based on what we see in practice from day to day. Paige is not only an excellent athlete, but she’s a great teammate as well. She’s very respectful towards coaches and her teammates. She’s always looking to help out in whatever way she can. She takes feedback well,” he said. “We’re very encouraged by her progress and we’re really looking forward — as we move toward the end of the season — to see what she can do.”

Aaberg said her talent in the hurdles was obvious early on.

“We knew about Paige from her seventh grade year. She missed out on having that eighth grade experience, that hurdle experience would have helped her,” he said. “We’ve been really pleased with her progress this year and she’s kind of come on slowly since the start of the season. Now that she’s getting healthy and really buying into practice and what we’re trying to do as a team, the future is very bright (for Horne). Her performance (at Best in the West), in both the short and long hurdles was pretty exceptional.”

So far, Horne said she has fared better than she thought she would going into the season.

“I feel like I’ve done more than I expected I could do. It’s really awesome to be able to experience this with my team and everybody supporting me and to see everybody else succeed,” she said.

“It’s awesome to be part of (Scottsbluff’s tradition of having) hurdlers that kick butt.”

Horne said she is looking forward to the postseason to see where she stacks up with the best in Class B.

“My goal for the rest of the season is to go to state to compete and see if I’m up to the girls there. Just have fun,” she said.

The Morrill boys ran away with the team title at the Panhandle Athletic Conference Track and Field Invite on Friday. The Crawford girls edged Sioux County for the girls title.

The Scottsbluff girls advance to the district finals despite falling 2-0 Lexington in the Class B-8 Subdistrict final.

MITCHELL — The Mitchell boys and Bayard girls ran away with the team titles at the Western Trails Conference Track and Field meet on Monday.

The Gering, Alliance and Scottsbluff tennis teams all picked up wins during their triangular on Thursday in Scottsbluff.

For years, the girls state tournament has run during the first weekend of March, and the boys played the following week.

Alliance's Crayten Cyza claimed the Gering Golf Invite title after shooting a 72, and helped his team claim third in the team standings.

Not only does Quaran McPherson have a past connection with Nebraska assistant Matt Abdelmassih, new teammate C.J. Wilcher is "like a brother."

Huskers may soon get shot in arm with Perry's return, and it comes ahead of critical stretch

Scottsbluff's Paige Horne holds up the gold medal she won in the 300-meter hurdles at the Best in the West Invitational on Monday, April 26 in Scottsbluff.

Paige Horne competes in the 100-meter Hurdles at the Binfield Invitational on Friday, March 26 at Bearcat Stadium in Scottsbluff.