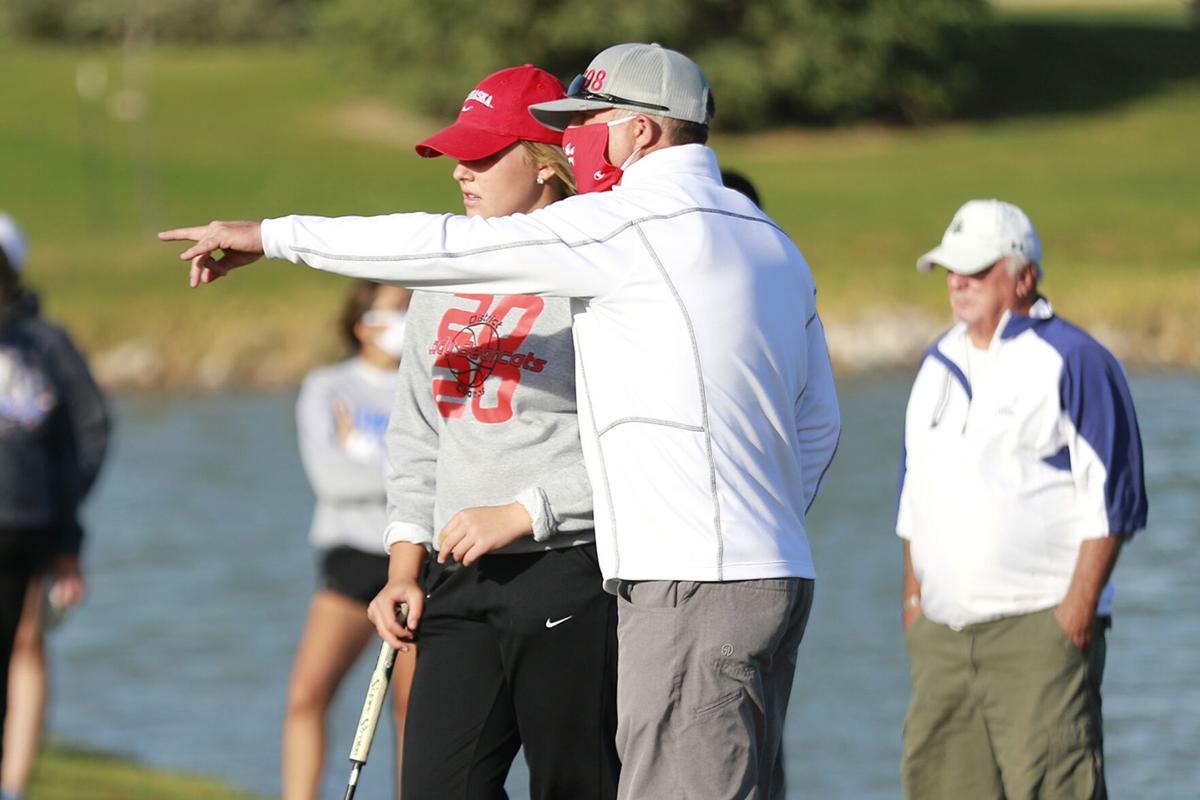 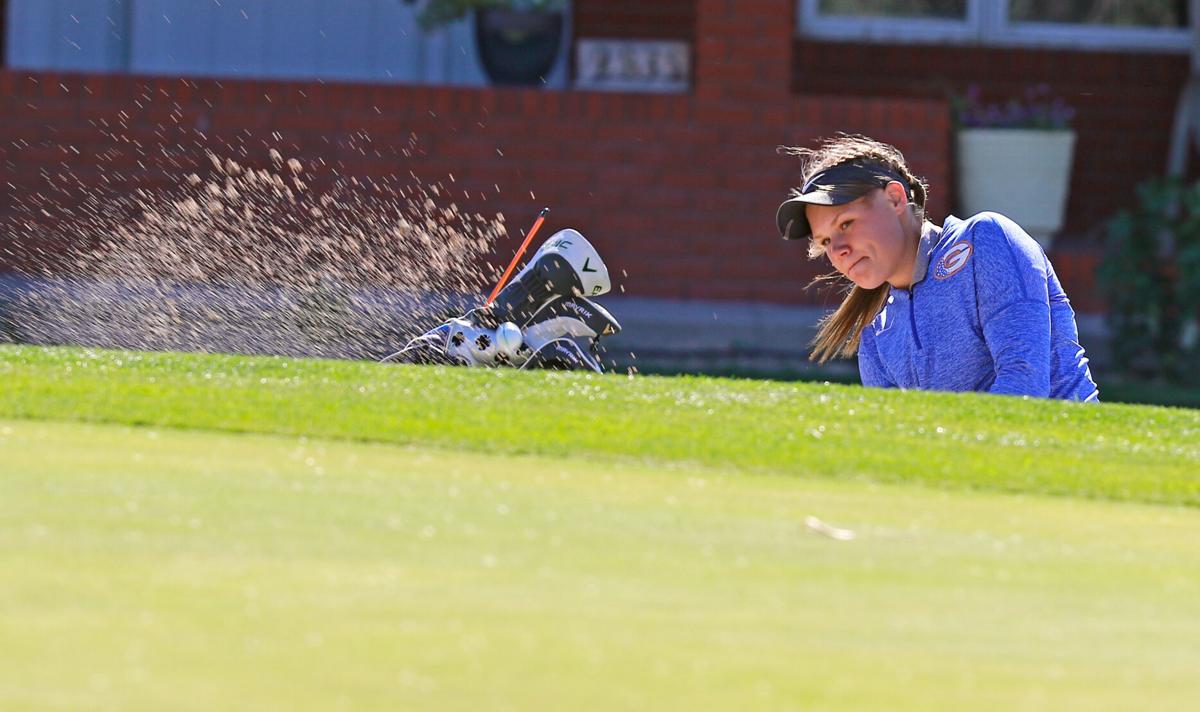 Gering's Madi Schlaepfer hits out of a sand trap during the first round of the Class B Girls State Golf Championships at Monument Shadows Golf Course in Gering on Monday, Oct. 12. 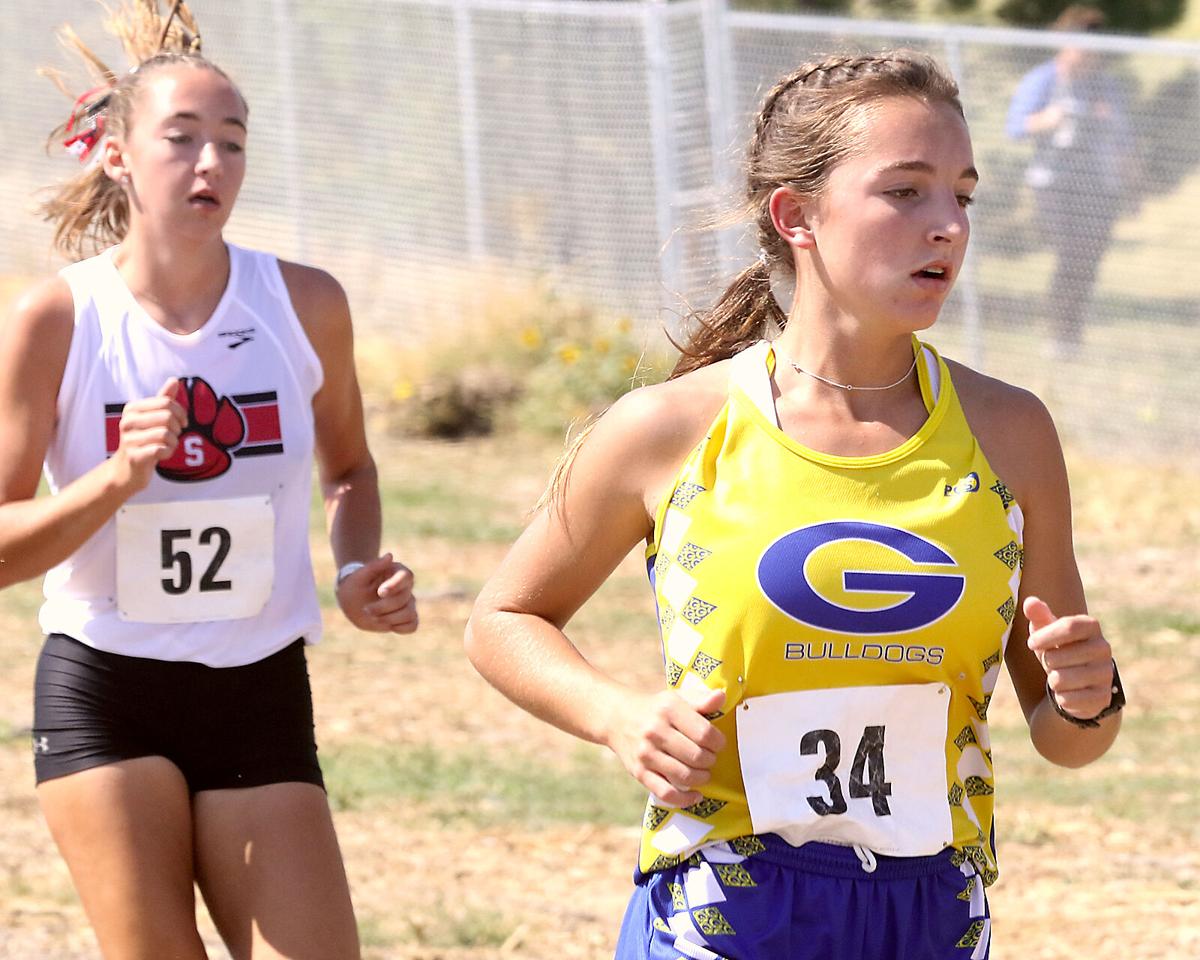 Based on the strength of their finish in the Class B State Golf Tournament, Scottsbluff’s Anna Kelley and Gering’s Madi Schlaepfer were named to the Nebraska Coaches Association’s Girl Golf Super-State team.

“It was an honor to be named to the Super State team this year. I worked really hard over the summer and it paid off this season,” Kelley said.

Schlaepfer said she was honored as well.

“For me, personally, to be on the Nebraska Coaches Association Super State team is an honor. Not many athletes get the chance to be nominated for this team, so making it on the team is an absolute honor,” she said.

Kelley said, while it was honor to be named to the Super State team, she won’t be focused on that next season.

“I don’t think it will add any pressure because I always try to do my best in every tournament. I know some tournaments will be better than others, but my goal is to always compete to the best of my ability,” she said. “I try not to think about what happened in the past and put my full focus on the tournament that I’m competing in.”

Schlaepfer said being named to Super State is indicative of the talented athletes in western Nebraska.

Schlaepfer said she had a great senior season.

“Overall, I had a fantastic season,” she said. “I was able to beat personal goals, and I was able to set a new school record (by shooting a 69). Even though I fell short at the state championship, my high school golf career ended full of achievements and memories.”

In girls cross country, Gering’s Maddie Seiler dominated the competition in winning the Class B state title. Seiler was named to the NCA’s Super State team based on her finish at the state meet.

Seiler’s brother Peyton Seiler earned a spot on the All-State team in Class B. Sidney’s Daniel Bashtovoi was named to the Class C All-State team.

Six Bridgeport football players earned C2-6 All-District honors after a successful season with three each on the offense and defense.

Check out the full video from Scott Frost's postgame press conference following the win over Penn State as he breaks down how much this win means for the Huskers.

After a 7-2 campaign filled with bumps, bruises and tragedy, Bridgeport coach Jeremy Reimers was announced as the winner of the C-2 Berens Coaching Award.

Nebraska men's basketball lost a key frontcourt player for at least half the season Wednesday when Derrick Walker was suspended by the NCAA for violations committed at a previous school.

Nebraska was left to shuffle its schedule after more teams pulled out of the event being held in Lincoln over Thanksgiving week.

The Huskers are going to sport an alternate uniform Saturday against Illinois on the same week coaches handed out the coveted Blackshirt practice jerseys.

Scott Frost names 12 new Blackshirts, but 'they don't have them permanently'

Scott Frost revealed which players have received the coveted Blackshirt jerseys, but he issued a reminder that "if they don't live up to the standards of the Blackshirts, they won't keep them."

Move over St. Paul: Napoli stadium to be named for Maradona

Today in sports history: Notre Dame wins rivalry game vs. USC in battle of unbeatens in '88

Gering's Madi Schlaepfer hits out of a sand trap during the first round of the Class B Girls State Golf Championships at Monument Shadows Golf Course in Gering on Monday, Oct. 12.