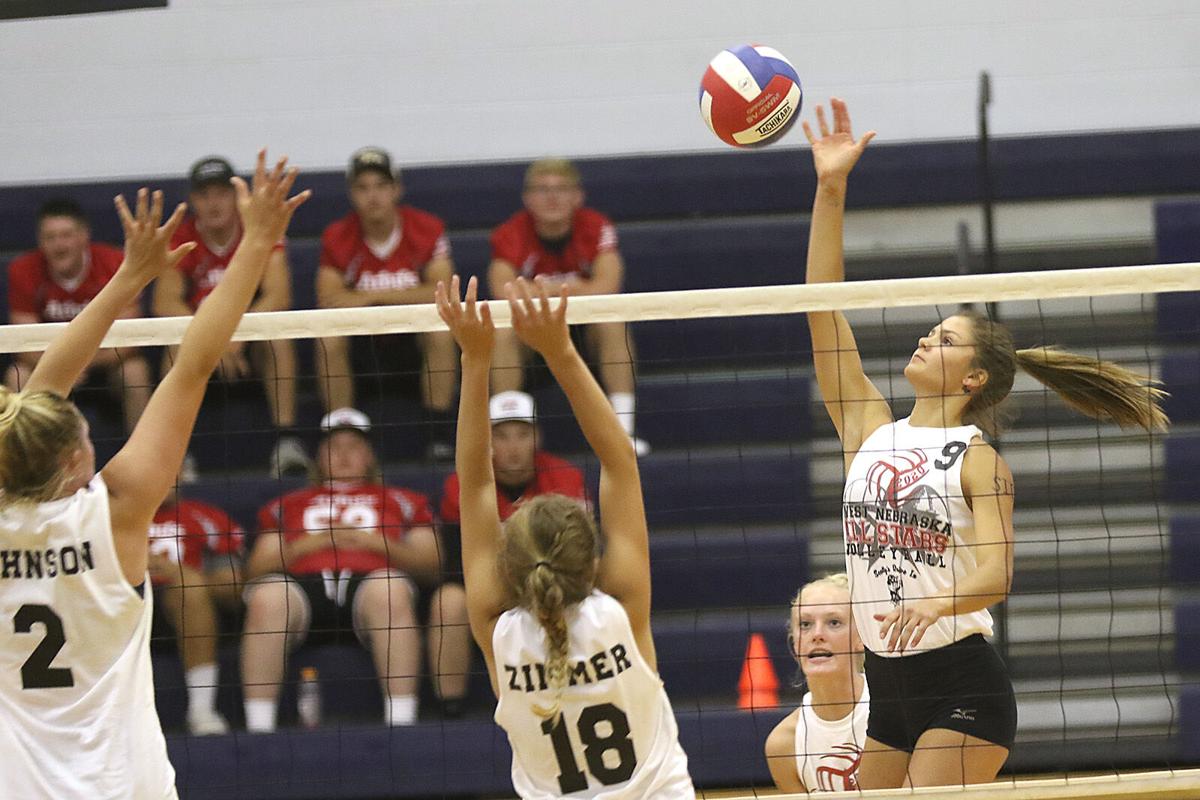 Mattie Johnson, of Sidney, pounds down one of her 17 kills during the West Nebraska All-Star volleyball game on Friday, July 24 at WNCC's Cougar Palace. 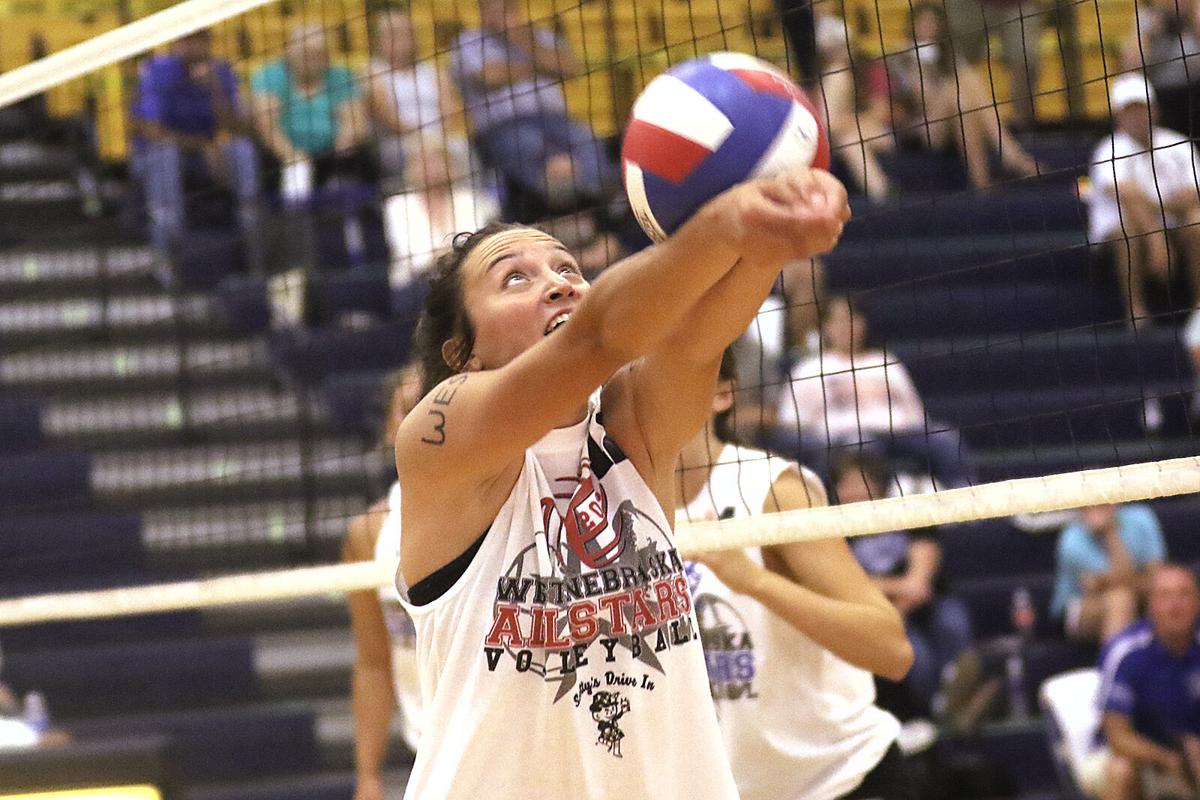 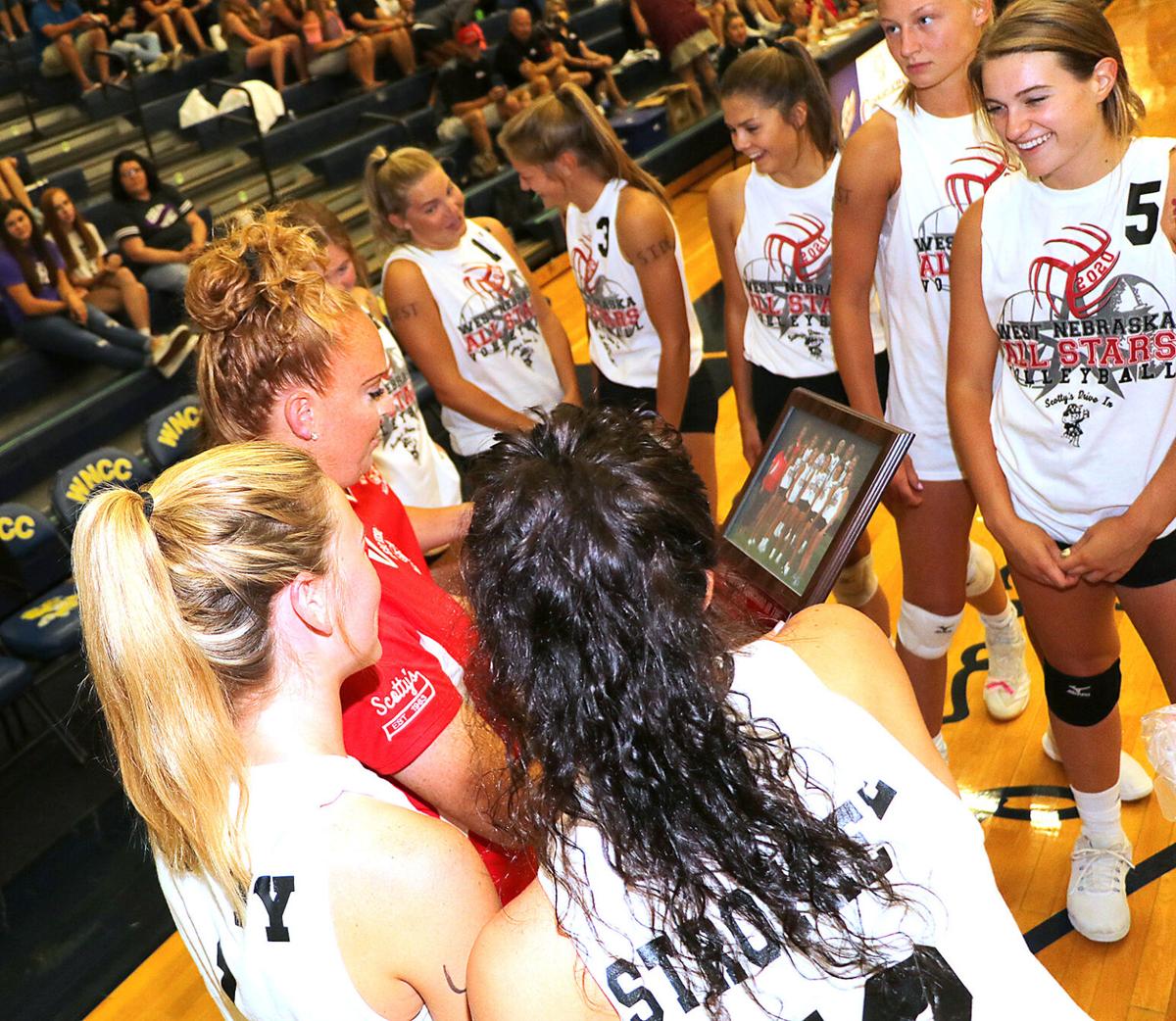 West coach Blakelee Hoffman talks with her team after her squad defeated the East in the West Nebraska All-Star game on Friday, July 24 at WNCC's Cougar Palace.

Mattie Johnson, of Sidney, pounds down one of her 17 kills during the West Nebraska All-Star volleyball game on Friday, July 24 at WNCC's Cougar Palace.

West coach Blakelee Hoffman talks with her team after her squad defeated the East in the West Nebraska All-Star game on Friday, July 24 at WNCC's Cougar Palace.

Johnson was named the MVP for the West while Maywood-Hayes Center’s Avery Johnson was the East MVP, finishing with nine kills, five blocks, and 15 digs.

“It was a lot of fun,” Mattie Johnson said. “A lot of these girls I played against the last couple years so to play with them for another time was pretty fun.”

For Mattie Johnson, it was a chance to get back onto the court before she heads up to the University of South Dakota.

Avery Johnson, who is headed to North Platte Community College to play volleyball, said it felt good to have an all-star game after what the pandemic has done to sports the past couple of months.

“It was very exciting to play in the game,” Avery Johnson said. “It was nice to have an all-star game this summer since everything got canceled because of COVID. I am excited for the girls to come back and play with everyone.”

The all-star volleyball game was the only game in town Friday after the all-star football game was canceled because of an East player testing positive. Avery Johnson said she felt bad for the football players because they didn’t get to play.

“I am very grateful that volleyball got to go on and play,” she said. “My heart is out to all the football players because they were very excited to play one last time. I feel really bad for them.”

The volleyball match itself was competitive even though the West won all five sets.

“It was just exciting [of a game],” Avery Johnson said. “The West side had a ton of talent and they are amazing girls. I play basketball with some of them and they are very good. I am really glad to get to know my team and bond with them for sure.”

Both players were also surprised to be awarded the MVP of the game.

“I am kind of surprised,” Mattie Johnson said. “I just wanted to come out and play and have fun. It was so fun to play with these girls. I had a blast.”

“Yes, I was surprised,” Avery Johnson said. “It takes a whole team, so I am, and it really doesn’t matter to me. It is just nice to be playing with everyone. It was very long and very exhausting, but I think it got me in shape. I was very out of shape for this, so it is exciting to get back into it.”

The first game started out back and forth The East led 10-9 and then had the game tied at 11. Mattie Johnson put the West up 16-14 on a kill. The East cut the lead to 16-15 but Mollie McNair kill and then eight straight Madelyn Watchorn service points gave the first set to the West 25-15.

The East started the second game on a Kinsey Skillstad kill and two Brianna Glendy points for a 3-0 lead. The West came back to grab a 6-4 lead on a Tyleigh Strotheide two service points. The East came back to tie second game at 6-6 on an ace serve from Alexis Zimmer.

After a West block, Jaedy Commins served six straight points for a 13-6 lead and the West went on to lead 23-13 on a Strotheide service points. The East came back as Avery Johnson had three service points, but Watchorn and Allie Ferguson each had kills to give the West the 25-17 win.

The Fourth game saw the West jump out to a 7-2 lead behind three points from Strotheide. The East battled back as Michaela Dukes had three points to bring the East to within one at 11-10. The West’s Garrett had two points and Commins had two kills to put the West up 20-15 only to watch Skillstad got a kill and Dukes two points to cut the lead to 20-18.

The East cut the lead to 22-19 before Mattie Johnson hammered home a kill and Commins served the final two points, the last on an ace, for the 25-19 win.

The fifth set was just as exciting. The East forged ahead 3-0 on three Glendy points and led 13-5 after four MaShayla Burnett points. Watchorn stopped the scoring spree with a kill and then served two points behind kills from Commins and Ferguson to cut the lead to 13-8.

The East got a sideout and was one point from taking the fifth set. But Ferguson hammered home a kill and then McNair served seven straight points including an ace, a couple double blocks, and a kill from Ferguson to come back to get the 16-14 win.

Powerful Southern leagues aim to forge on with fall football