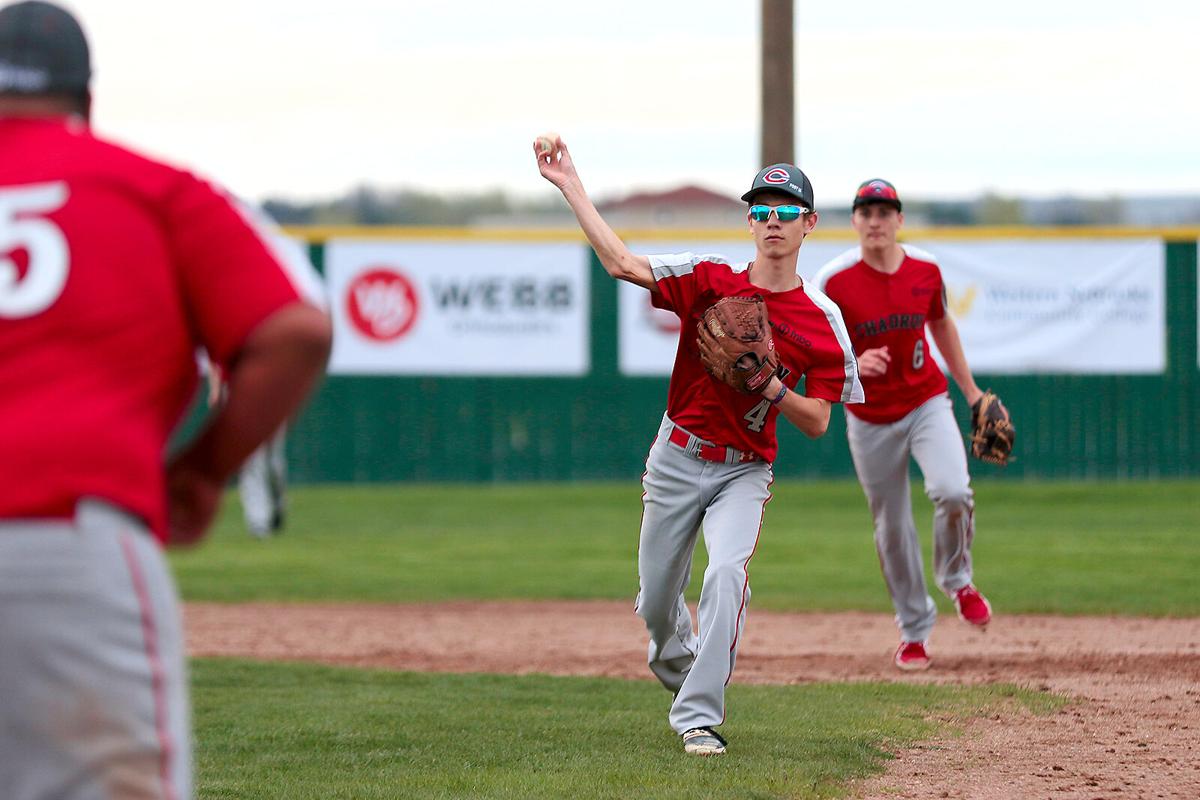 Chadron's Drew Milburn throws the ball to first baseman Tony Sanchez during a game against WESTCO on Friday, May 14 at Cleveland Field. 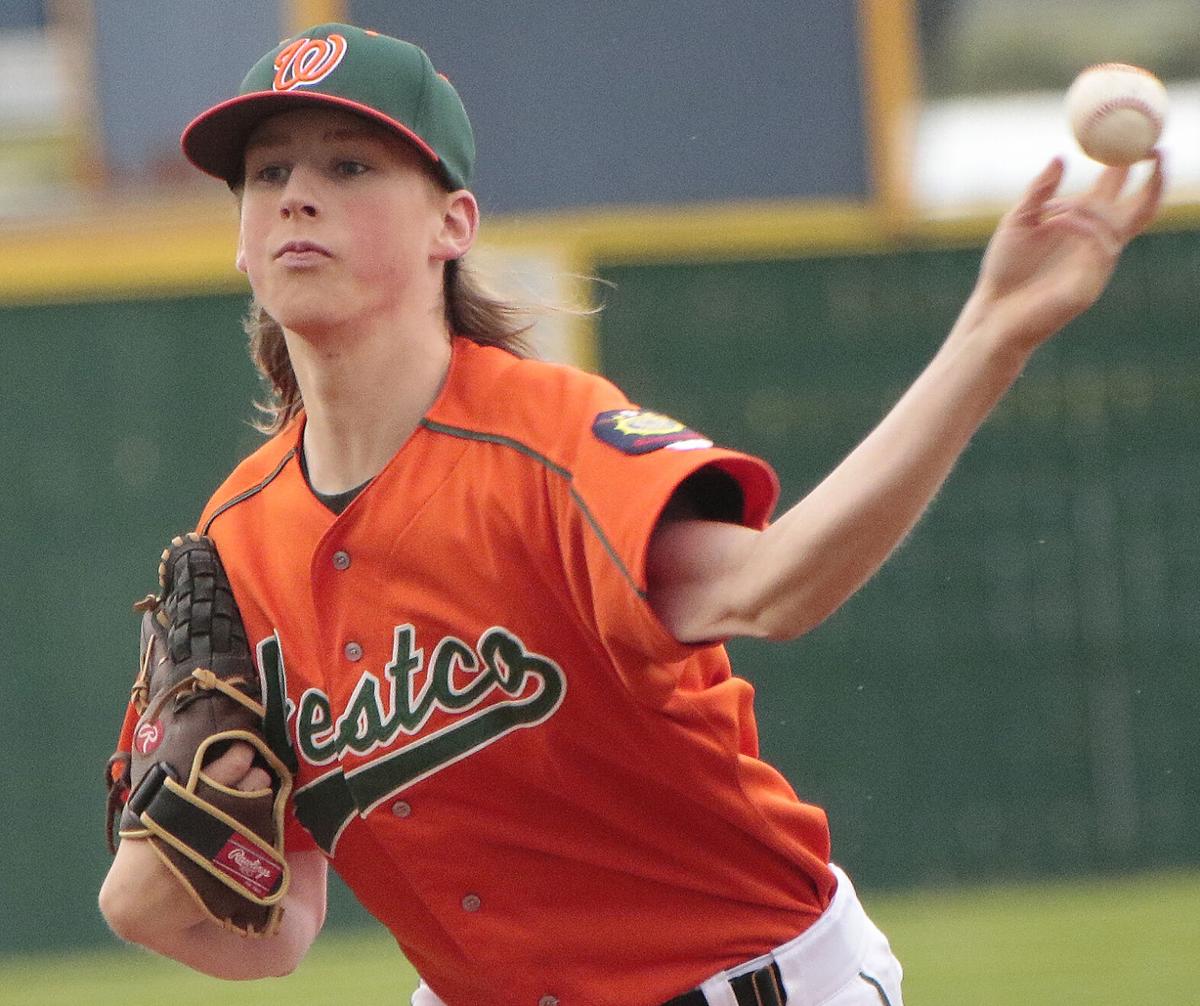 WESTCO's Gavin Baltz throws a pitch during a game against Chadron on Friday, May 14 at Cleveland Field.

A seven-run sixth inning propelled the WESTCO Express to a 13-5 win over the Chadron Nationals on Friday.

Chadron got on the board first. Seth Gaswick had an RBI single driving in Garrett Reece in the top of the first inning.

Michael Thrash jump started the Express offense in the bottom of the inning. A single to short scored Jackson Howard to tie the game at 1-1.

Thrash would come around to score on a single by Cameron Meyer. A fly ball to centerfield by Cortez Palomo drove in Gavin Dunkel to give WESTCO the 3-1 advantage at the end of the first.

Chadron’s Tony Sancez picked up a run on a single to centerfield by Jordan Bissonette to tie the game at 3-3.

The Nationals held the Express scoreless in the second and third innings.

WESTCO scored twice in the fourth and another in the fifth for the 6-3 lead going into the sixth inning.

The Nationals rallied at the top of the sixth. A Bissonette singled drove in Reese. With the bases load, Gaswick drew the walk to plate Michael Sanderson.

WESTCO held onto a razor-thin 6-5 lead going into the bottom of the sixth.

The Express scored seven runs as they exploded on offense. Corbin Loutzenhiser scored the first run of the inning on a Howard single.

On the next at-bat, Moises Pandura had an RBI single that scored Sabastian Martinez. Howard scored on a passed ball, and Dunkel hit a single to left to bring in Thrash for the 10-5 lead.

A passed ball scored Thrash. Andon Pittman drove in the last two runs on a single to centerfield knocking in Dunkel and Pittman also crossed the plate for the final score, 13-5.

Howard and Pittman powered the Express offense with two RBIs each. Both were 2-for-2 in the contest.

The Express take a week off. They will be back in action on Saturday, May 22 in Kearney for a doubleheader.

Morgan Chaffin won the Robidoux Quick and Dirty women’s division in the 100-mile race with a time of 5:55:58.58 on Sunday.

Husker AD Bill Moos spoke about the state of Nebraska athletics at the Big Red Blitz event at the Gering Civic Center on Wednesday, June 16.

The NU volleyball team had to clarify Lauren Stivrins' status for next season. Here's why

It all started in... Chadron. The Huskers' associated head coach made a comment that turned social media into a full-on rumor mill.

Omaha, home to the College World Series, will soon be home to the entire state high school baseball tournament.

New Zealand weightlifter Laurel Hubbard has qualified for the Tokyo Olympics to become the first transgender athlete to compete at an Olympic Games.

"It tells me I better start winning," Nebraska coach Scott Frost said with a smile as he spoke to a crowd of about 60 during the Big Red Blitz.

Pioneers move into first with win over Hastings

Be it eight teams or 12 teams, expanding the playoff makes sense, especially in the context of declining TV ratings for the CFP national title game.

Chadron's Drew Milburn throws the ball to first baseman Tony Sanchez during a game against WESTCO on Friday, May 14 at Cleveland Field.

WESTCO's Gavin Baltz throws a pitch during a game against Chadron on Friday, May 14 at Cleveland Field.