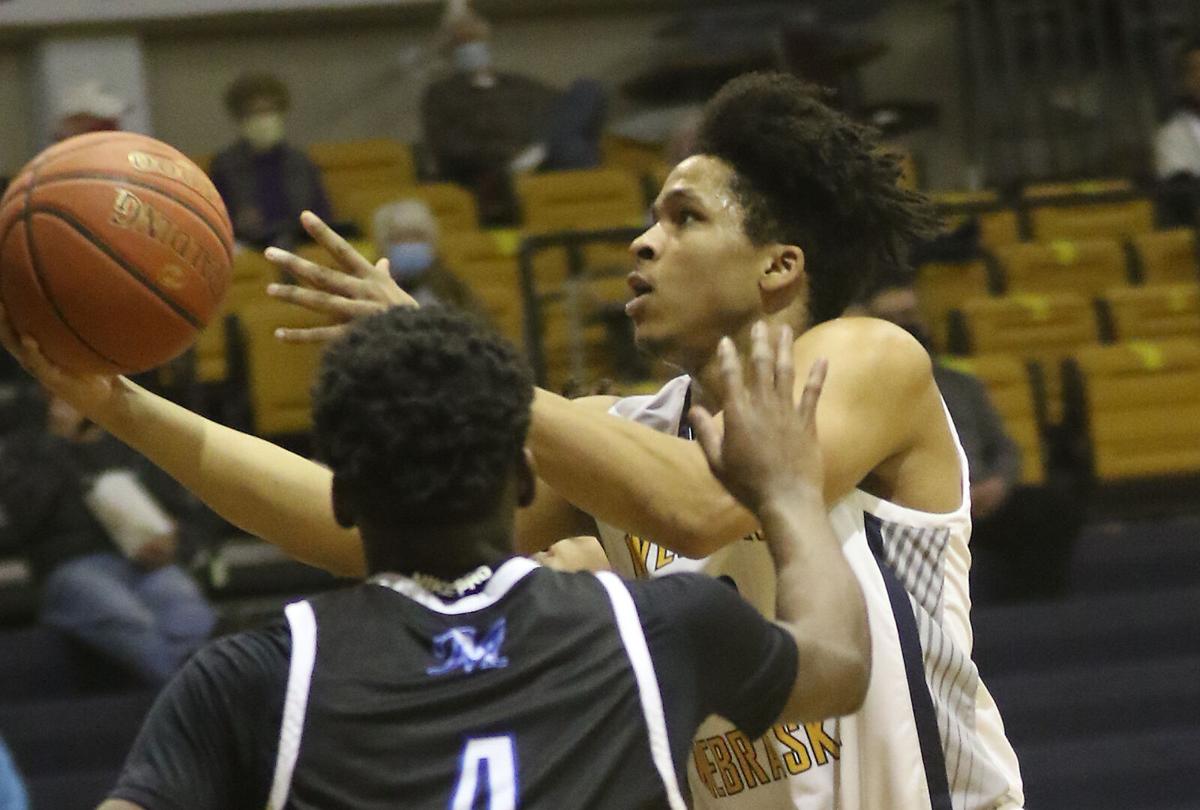 WNCC's Chase Thompson puts up a shot during the Cougars game against McCook on Friday at Cougar Palace. 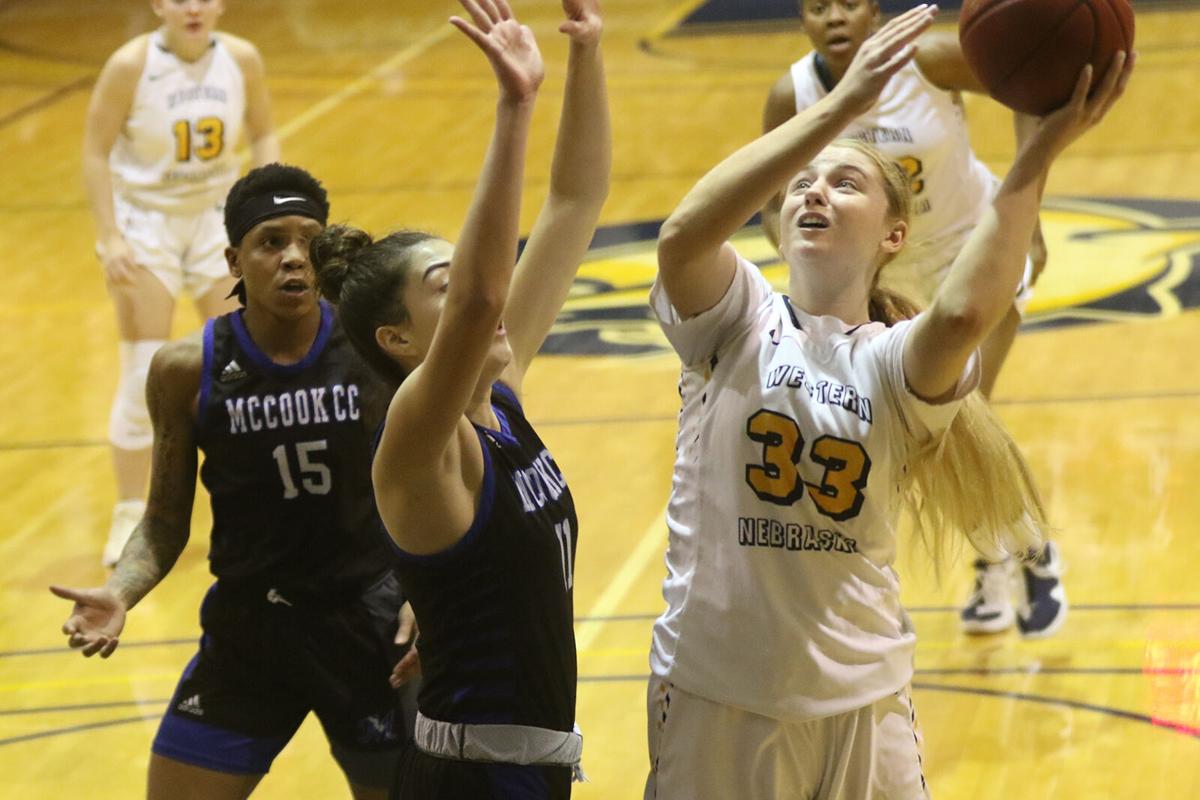 WNCC's Maddy Campbell puts up a shot over a McCook defender during their game on Friday at Cougar Palace.

The 19th-ranked Western Nebraska Community College women’s basketball team outscored McCook Community College 56-19 in the second half to open up a close contest to win going away 89-46 in a South Sub-region contest Friday evening at Cougar Palace.

A big key in the Cougars’ win was 3-point shooting, especially in the second half. WNCC shot just 8% in the first half (1-of-12) from beyond the arc. The second half saw the Cougars ignite for 53 % while burying eight treys.

Ky Buell led the way from behind the arc with three treys while Alejah Douglas had two treys.

Scoring was also widespread for the Cougars. On a night where Lidsey Mahoukou was held scoreless, WNCC put 11 players in the scoring column. Douglas led the way with 29 points including a perfect 9-of-9 from the charity stripe.

The first quarter saw WNCC jump out to an 8-0 lead behind six points from Douglas and WNCC went on to lead 13-2 after a Payton Fields 3-pointer. McCook came charging back cutting the lead to 13-9. WNCC led after the first 10 minutes of play 19-12.

McCook started the second quarter by slicing the lead to 19-14. The Indians kept battling as they cut the lead to 23-20 on a 3-pointer. WNCC pushed the lead back to seven points, 31-24, on a Panem old-fashioned 3-point play and went on to lead at halftime 33-25.

The second half was all WNCC. The Cougars defense held McCook to just seven third quarter points. WNCC held a 42-29 lead when the Cougars went on a 15-2 run as Buell had nine points and Shanti Henry nailed a trey. WNCC led after three 57-32.

The fourth quarter saw WNCC outscore McCook 32-13. The Cougars led 63-30 and went on a 10-0 run that saw WNCC jump to a 73-36 win. Moments later, Yara Garcia scored six points in a 90 second time frame and Madison Blaney finished off the scoring with a trey for the 89-46 win.

WNCC will be back in action Wednesday when they host Northeastern Junior College in a women’s and men’s doubleheader in a key South Sub-region match-up.

The Western Nebraska Community College men’s basketball team were outscored 47-37 in the second half as the McCook Community College Indians came charging back and claimed a South Sub-region 82-74 win over the Cougars Friday evening at Cougar Palace.

The entire contest was back and forth and both teams didn’t shoot the ball from beyond the arc. McCook shot just 13 % from the 3-point line in the first half (2-of-15) but connected on 6-of-13 in the second half.

WNCC couldn’t find the range from beyond the arc. WNCC didn’t make one trey in the first half, but still owned a 37-35 lead at halftime. The second half, the Cougars connected on just 2-of-9 3-pointers.

The score was tied at 67 when McCook went on a 8-0 run to lead 75-67 with six minutes to play on five points from Rahkiem Petterson. WNCC got the deficit to five points at 76-71, but McCook scored the next six points in over a two-minute period to go up 82-71 and get the sub-region win.

WNCC had three in double figures. Thompson had 21 points including 7 of 8 from the free throw line. Solabo finished with 16 points while Johnson had 14.

McCook had four in double figures. Petteson led the way with 20 points while Damien Perry finished with 19. Boaz Quinlan had 15 points while Julian Lual had 12.

WNCC will return to action next week when they host Northeastern Junior College on Wednesday in a women’s and men’s doubleheader beginning at 5:30 p.m.

Gering wrestler Paul Ruff talks about the tough loss he experienced at the state wrestling championship, the team win that lessened the sting and his goals to wrestle in college.

Norfolk Public Schools has been placed on probation after a racial slur toward the Omaha Northwest girls basketball team came from the high school’s student section during a Feb. 12 game.

Scottsbluff is now locked in as the No. 9 seed and must go east on Saturday. Beatrice, Elkhorn and Waverly now have home games for Saturday clinched in advance of their games Tuesday.

LEXINGTON — For the first time since 2010, the Bridgeport High School girls basketball team is headed back to the state tournament after earni…

Alliance captures B-8 sub-district over Sidney

The Alliance boys advance to the district finals after claiming a 49-44 win over Sidney.

The Bridgeport boys won its fourth straight C2-12 tournament title with a 75-39 win over Bayard.

WNCC's Chase Thompson puts up a shot during the Cougars game against McCook on Friday at Cougar Palace.

WNCC's Maddy Campbell puts up a shot over a McCook defender during their game on Friday at Cougar Palace.