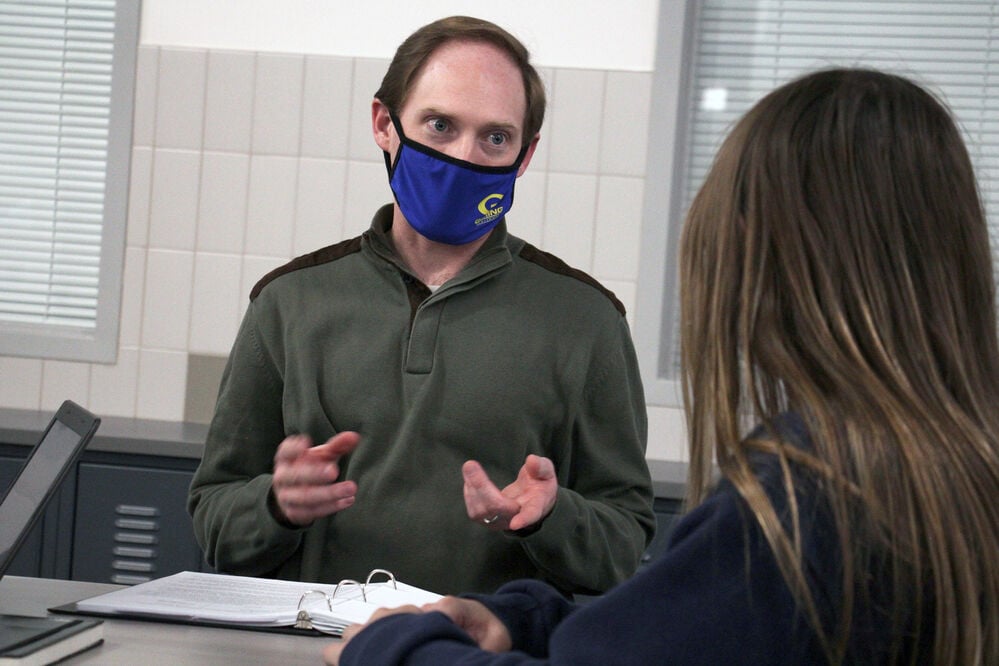 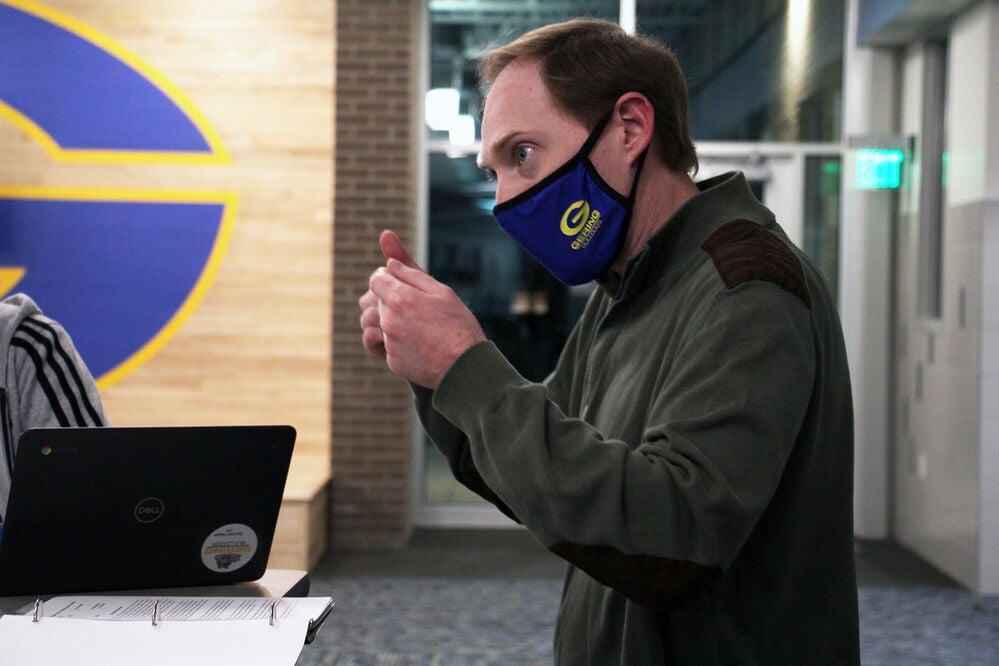 Andy Stobel, Gering High School English and German teacher and mock trial coach, discusses techniques with his mock trial students for asking and answering questions during one of their practices.

As high school students greeted then-Gering English teacher Roxanne Thompson at the door with a handshake and participated in practice interviews for her business etiquette unit, eighth grader Andy Stobel knew then and there that he wanted to be an English teacher when he grew up.

“I just thought it was the coolest thing,” he said.

Stobel, who now teaches English and German at Gering High School, said he knew from a young age that he wanted to be a teacher thanks to positive experiences with his own teachers, both at Community Christian School (CCS) and Gering High School.

His teachers’ impacts were so positive that he even came back home to teach, beginning his teaching career in 2007 at Gering High School and teaching there ever since.

“This has been my only job,” he said. “It kind of sounds clichéd, ‘Oh, I had such great teachers,’ but Gering was just as positive of an experience as CCS was.”

Stobel said throughout high school, he always pictured himself as an English teacher, but then during his senior year, his German teacher said he might consider pursuing German education.

“My German teacher Erma Rush pulled me aside and said, ‘You know, there are not many people going into German education these days. I’m not going to be here forever. So you might want to think about going into German teaching,’” he said. “And I loved German. It was fun, but I had never really considered teaching it. I just always had my sights on English.”

The next year he signed up for a German class at the University of Nebraska Kearney, and declared German as his second endorsement for secondary education by October of his freshman year, alongside English.

After his four years away from home getting an education, Stobel came right back to Gering High School, not only taking on teaching German and English, but also coaching the activities he succeeded at during his time in high school.

Stobel, along with his high school friend Tyler Thompson, took over coaching speech when their high school coach, Mary Winn, retired. Stobel also took on coaching mock trial and helping out with the spring musical.

“There was also a part of me that wanted to continue to be involved in the activities that I had been a part of, because I had reaped the benefits of those myself,” he said. “And so I wanted to come back and pass that on to the next generation of students.”

Stobel eventually scaled back to just coaching mock trial and co-directing the musical after he began to have a family with his wife, whom he actually met in mock trial during his sophomore year.

“Mock trial was not open to freshmen, actually until my sophomore year when they were short a person, and so they brought in a freshman who eventually became my wife,” he said. “By my senior year, I was her attorney. She was the witness; I was the attorney.”

He and his wife, along with the rest of their mock trial team, were quite successful, placing third his sophomore year, first his junior year and second his senior year at the state level. Gering High School actually hasn’t won the state championship in mock trial since Stobel’s junior year.

“We are still chasing the elusive championship,” he said. “I keep a record so I can show the kids every year to kind of motivate them with ‘Here is our legacy.’”

So far his legacy as coach includes six trips to state since he took over in 2010, never placing below fourth, except last year when they got sixth.

Now finishing up his 10th year of coaching mock trial, he’s gotten the opportunity to coach alongside his own high school attorney coach Bell Island the entire time, and now they’ve added on a third generation helper who has had Stobel and Island as coaches in high school and wanted to come back to help.

“(It’s fun), because Bell and I can share stories about when I was a student, and then, you know, we’ve all got stories now from when Brandon was a student,” Stobel said, with a laugh.

While he enjoys his role as coach and sponsor for the different activities, Stobel said that he does miss being a part of the action at times, though, especially with the musical. Nevertheless, he is glad for the opportunity to pass down his love for the activities and delights in watching his students find that passion too.

That, he said, has to be his favorite part of his job, both as an activity sponsor and a teacher.

“I think that’s probably one of my favorite parts is just watching kids blossom, ...seeing them as a little timid freshman speaker to being state champion senior year, or having a role in the chorus as a freshman, then being a lead as a senior,” he said.

“For German, I have them all for years. I’m the only German teacher they’ll get. And so I get to start them as freshmen when they know absolutely nothing, and then I get to send them off after senior year, when they could carry on a conversation if they had to … So to see the growth is really cool.”

Even better, he gets to do it alongside people he’s known forever. When he first began his teaching career, he taught alongside many of his own high school teachers. As they retired, two of his high school friends came on board. He even got to teach next door to his wife for a few years as well.

“I always said, ‘Where else can someone go to work with their best friends from high school?’” he said. “Now there is the three of us working together, and I would often think to myself, ‘Who else gets to say that they can do that?’”

For Stobel, it was never a question that he would come back home to pursue a career he’s been passionate about his whole life. He said he hopes that more students might have an experience like his, or at least will consider it.

“I guess if there’s kind of a summary to all of this, it’s that for kids right now in high school who think, ‘I can’t wait to get out of Gering. I can’t wait to leave this place behind,’ — I do think it’s important to go away and experience other things, experience new states even experienced new countries — but there certainly is value to coming back,” he said. “Because, to contribute and put back into the community that provided so much for you, I think is an important thing to do. And then just to still have family here, still have those connections, I think can be as equally rewarding as going off and settling somewhere else.”

The district board of education earlier this month approved nine resignations, many of which were solely because of the mandate, said Superintendent Todd Chessmore.

The Western Community College Area Board of Governors formally accepted the resignation of President Carmen Simone during its Wednesday, June …

In April, UNL asked a federal judge to dismiss the case, which alleges insufficient responses into sexual misconduct and harassment.

Impacting the lives of youth is why Todd Menghini is passionate about being an educator. That impact led one of his former students to nominat…

A longtime friendship will bring the American Rhythm Folk Ensemble of Utah to the small town of Bayard on Wednesday, June 2. 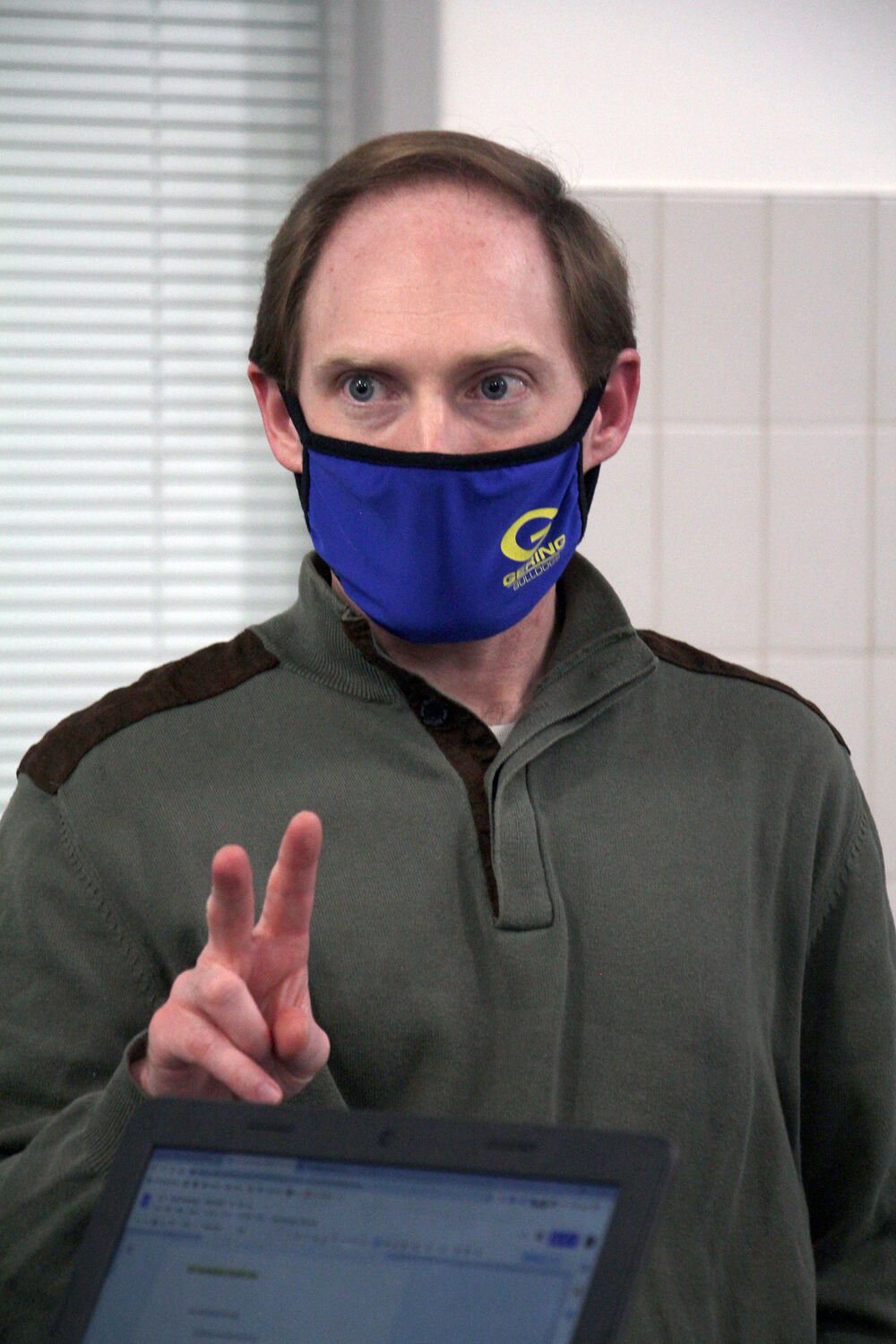 Andy Stobel, who grew up in Gering and graduated from Gering High School, came back to teach at his alma mater right after he graduated from UNK. It's the only job he has ever had, and he said he wouldn't have it any other way.

Andy Stobel, Gering High School English and German teacher and mock trial coach, discusses techniques with his mock trial students for asking and answering questions during one of their practices.