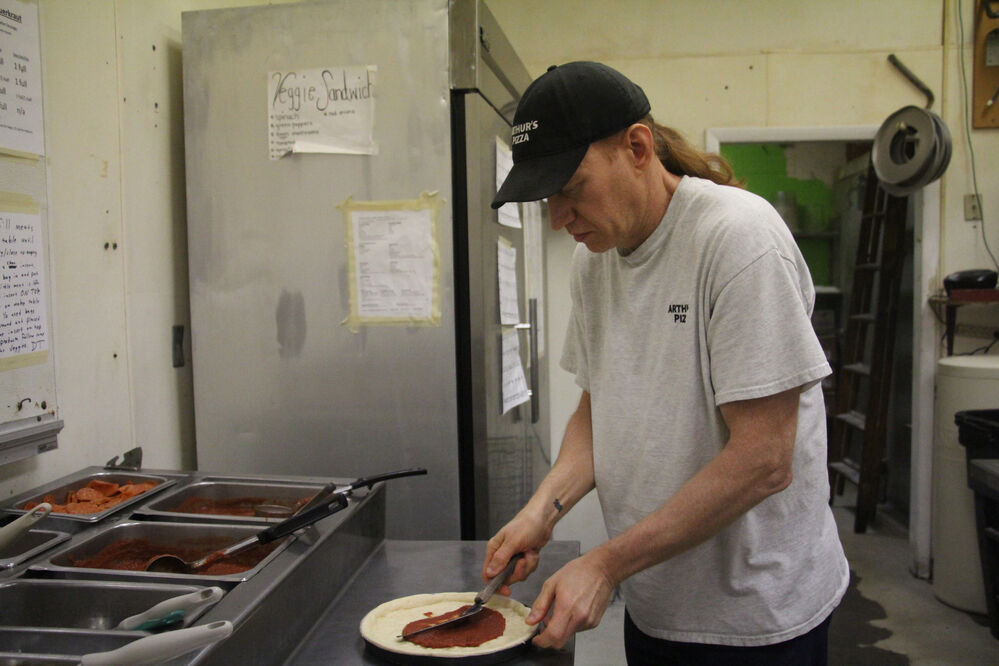 Dave Thiele, owner of Arthur's Pizza, spreads tomato sauce to make the base for a Fiesta Pizza. The restaurant serves several types of pizzas, from four-topping favorites to secret off-menu items. 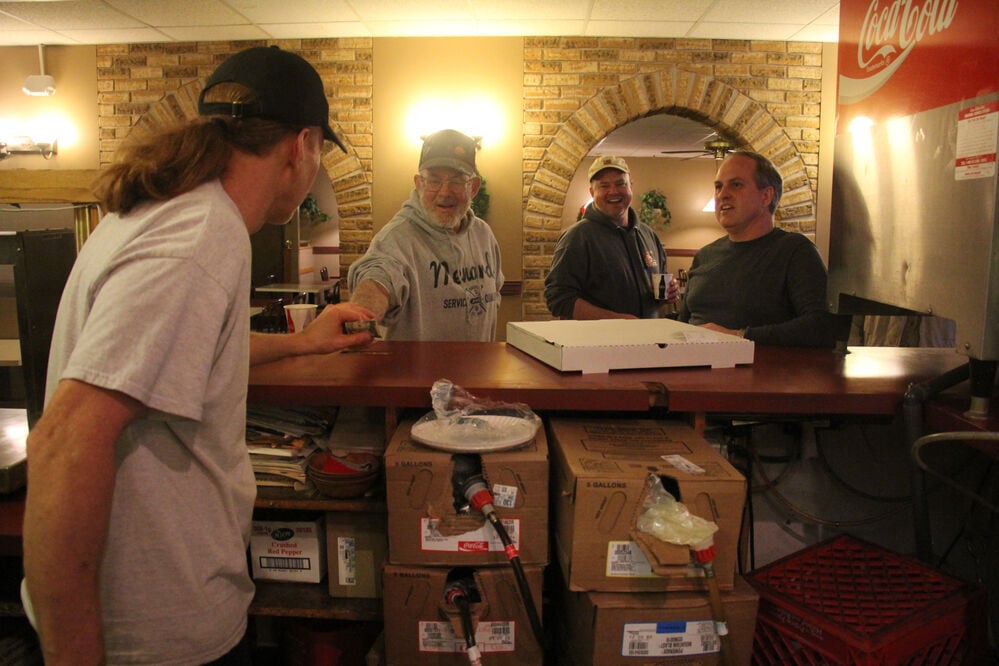 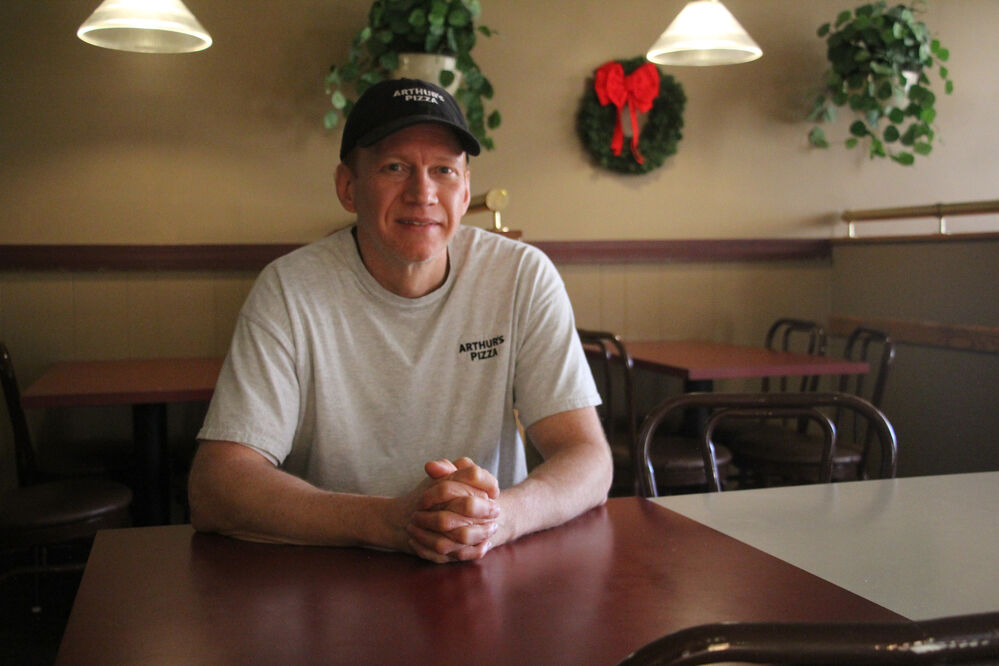 Arthur's Pizza owner Dave Thiele, son of the restaurant's namesake Arthur Thiele, made his establishment an independent business earlier in the year. The food hasn't changed, he said, just the names. 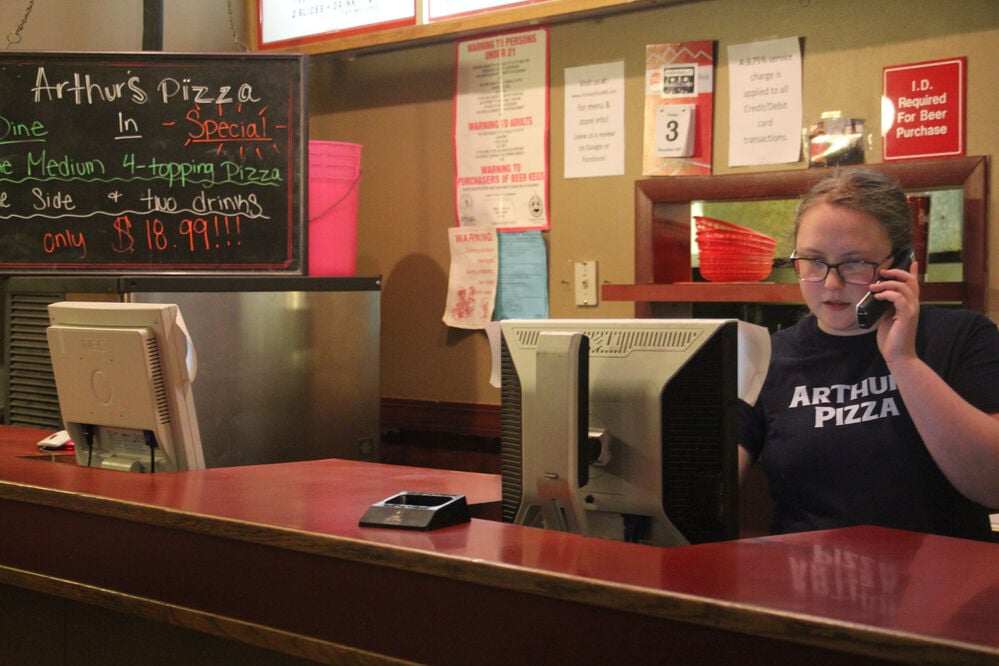 Kenzie Budke, counter staff at Arthur's Pizza, takes a customer's order by the phone. The restaurant is busiest in the evenings, when customers often order meals for takeout or delivery.

Arthur’s Pizza, located at 2207 Broadway in Scottsbluff, has existed for eight months. Prior to that, it was a Godfather's franchise from 1976 until April 1, 2021.

Owner David Thiele said he’d been mulling over being an independent business. The opportunity came when the franchise’s 15-year contract was due to expire.

The new contract was much longer than in the past and would be more expensive to renew. The new agreement would have also lasted for a shorter period of time. So Thiele decided not to renew it and went independent. He renamed the restaurant after his father.

“It came down to the point where I would rather wear my father’s name on a shirt than their name,” Thiele said. “... The way things have gone, it was just God’s way of dropping it in my lap, saying ‘This is your opportunity to do something like this.’”

Thiele has owned the Scottsbluff restaurant since 2009, but he’s been involved with it since he was a child. His dad was the original owner. Arthur Thiele owned many Godfather’s locations, but he was rarely able to work at any of the restaurants.

“There was inevitably an issue with one store or another,” Thiele said.

From maintenance to employee turnover, his father had to deal with a lot. So Thiele decided he would rather focus on running one restaurant instead of dealing with several.

“I might never make as much money as my dad did,” he said, “but I’ll be more in control than he was.”

The name change and independence came suddenly, and Thiele had to take out an ad in the Star-Herald to let customers know it was still the same pizza they had been familiar with.

“When we made the change and left the franchise, I still wanted to offer the same varieties people had come to expect,” Thiele said.

A few of the ingredient portions changed as well, but the menu largely remained the same. Thiele had to raise prices somewhat, but he said he focused more on the quality of the pizzas to make up for it.

“With all these factors in mind, I try to create a product that people think is a good bang for their buck,” he said.

As he has for years, Thiele helps make the pizzas themselves. He also delivers them and mans the counter, as well.

There are items which aren’t even on the menu to begin with...at least, not officially.

“These are things we can ring in, we just don’t necessarily promote it ... I think that also plays into the small town, corner, dive bar-type pizza place. You want to have a couple bullets in your holster of weird stuff. It gives it a solid cult-type following.”

These include the ‘Meat and Potatoes’ pizza, which normally includes beef, potato wedges and a base of ranch dressing instead of marinara. That pizza is Thiele’s own brainchild. There’s also the ‘Sauerkraut Deluxe,’ popular with the German-Russians of the area, with ham, beef, Italian sausage and the eponymous sauerkraut.

While Arthur’s does serve options such as chicken wings and breadsticks, Thiele said his primary focus is on the pizza. Like when he took over the restaurant, he said he’d rather focus on doing one thing well.

The atmosphere of the restaurant is that of a traditional small town pizza joint, “kind of the niche...that may have been underserved in the past,” Thiele said.

Several old-school arcade games are located at the front of the restaurant, and until the coronavirus pandemic, there was a party room in the back.

Arthur’s is still a common destination for family gatherings and sports teams, and birthday parties are a routine sight.

“Birthdays and pizza are like hand and glove,” Thiele said.

While it cannot host as many people as it could with an open party room, he said the restaurant can easily accommodate groups of around 20 to 30. One other aspect of the restaurant which disappeared due to COVID was the buffet. Due to increased pickup and takeout orders, Thiele said it would be more profitable to operate without it.

Thiele has started up a new service in the last few months. From 11 a.m. to 2 p.m., Arthur’s Pizza now serves pizza by the slice.

It’s an idea Thiele gleaned from selling slices at Bands on Broadway events in the summer. He said it’s also a way to reinvigorate Arthur’s student customer base, which declined during the pandemic.

With a big focus on students and gatherings, Arthur’s aims to live up to their slogan ‘Made in 21.’ The number serves as both the year it became an independent business, and the county it serves.

And the restaurant does aim for a big reach. Every month, Thiele sends out a mailer filled with coupons.

“That’s supposed to go to every house in town.”

The mailer always features the same options, but you don’t need to present them to get the discount.

“... Whatever you call up and receive,” he said, “we’ll give you a discount on that pizza.”

The Italiano Four Topping Favorite, which comes with a nice assortment of pepperoni, sausage, green pepper and onion.

Mixing Bowl to mix things up with new location

Jamie Meisner has owned The Mixing Bowl Cafe in Gering for a little over eight years now. Over time, it has expanded to become a premier dinin…

A Crawford woman and her daughter from Chadron were killed around 4:20 p.m. on Friday, Jan. 14, when their vehicle collided with another near …

'One of the darkest times of the pandemic': Nebraska hospital leaders share fears as COVID-19 positivity rate soars

As hospitalizations have spiked, the percentage of Nebraskans testing positive for COVID has skyrocketed from 11% to 27% -- a potential harbinger of more hospitalizations to come over the next month.

Panhandle public health officials are seeing a rapid increase in COVID-19 cases, particularly among youth age groups, over the past week.

Initially, co-owner Joe Margheim wasn’t sure if he wanted the Flyover Brewery to serve food.

Gretna’s Class A football championship has been vacated by the NSAA board after the school was determined to have used an ineligible player.

Dave Thiele, owner of Arthur's Pizza, spreads tomato sauce to make the base for a Fiesta Pizza. The restaurant serves several types of pizzas, from four-topping favorites to secret off-menu items.

Arthur's Pizza owner Dave Thiele, son of the restaurant's namesake Arthur Thiele, made his establishment an independent business earlier in the year. The food hasn't changed, he said, just the names.

Kenzie Budke, counter staff at Arthur's Pizza, takes a customer's order by the phone. The restaurant is busiest in the evenings, when customers often order meals for takeout or delivery.