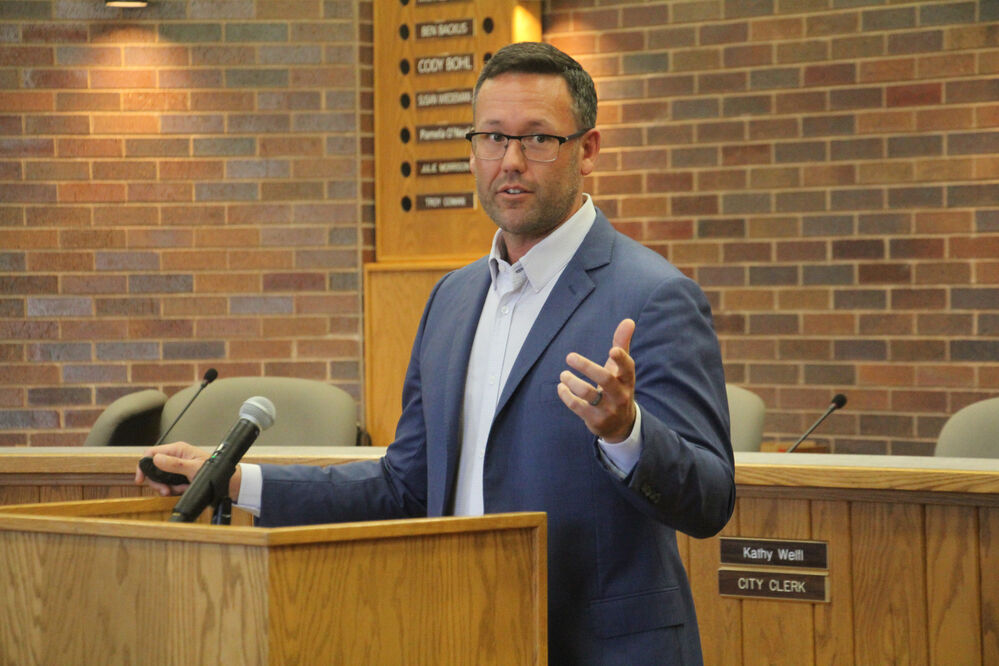 Sean Boyd of Global Gaming Nebraska said the casino and racetrack entertainment venue would create more than 150 jobs and bring in millions for the city and county over the course of the next decade. 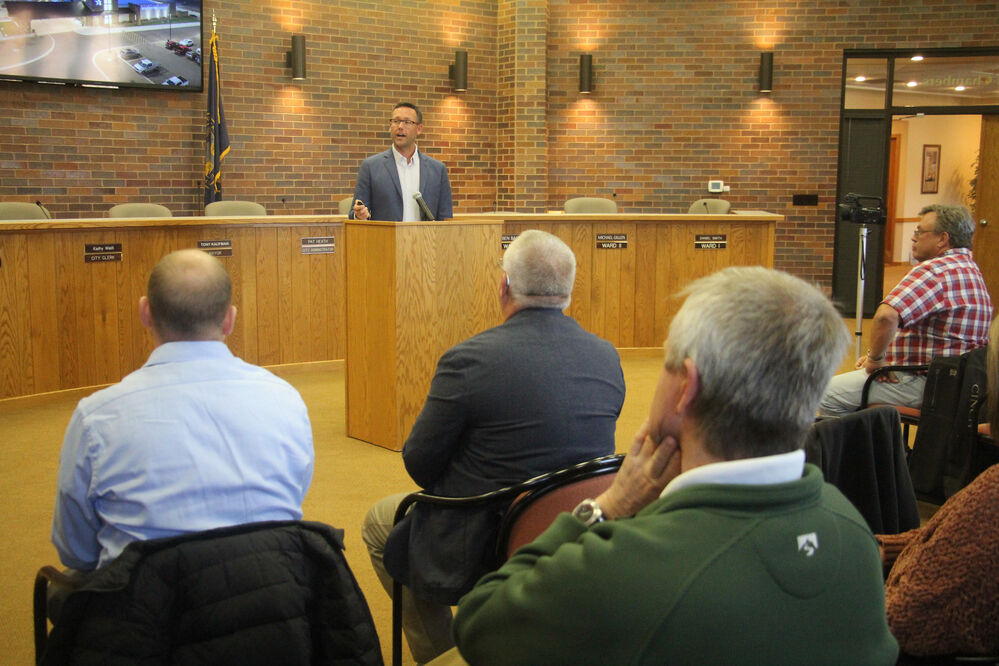 Boyd's presentation included comparisons to, and information about, various other casino and racetrack venues which are also managed by the Chickasaw Nation. 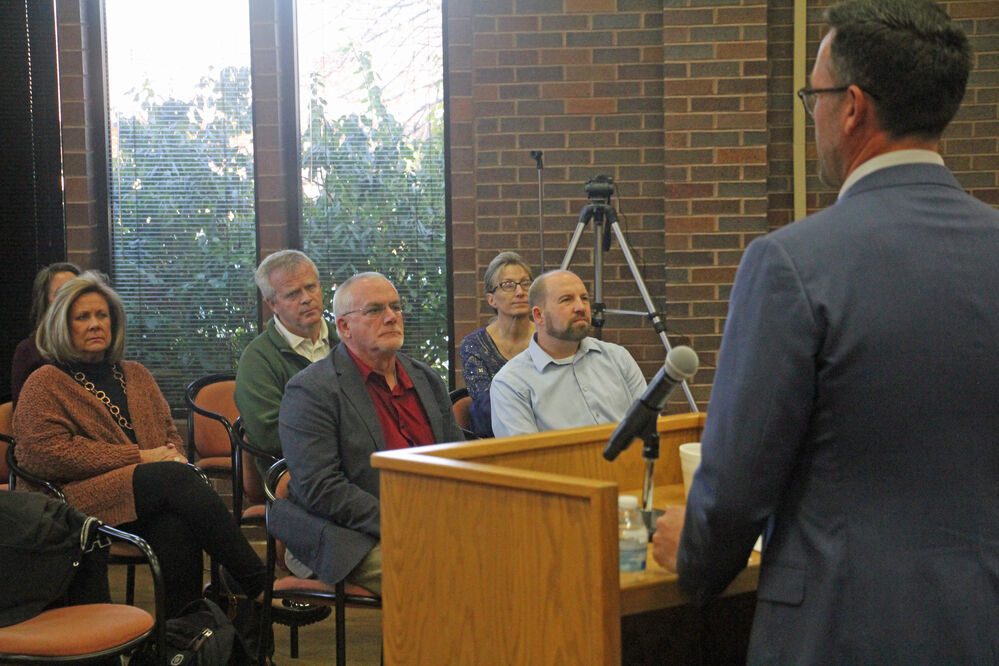 Global Gaming Nebraska president Sean Boyd presents to an array of around 20 local officials regarding his group's plans for a racetrack and casino to be built in Gering.

Officials from Global Gaming Nebraska say a proposed racetrack and casino will create more than 150 jobs and bring millions of dollars to Gering and Scotts Bluff County.

Global Gaming Nebraska’s president Sean Boyd, who had visited Gering to pitch the project in September, said it was important to continuously update the community.

“We think transparency is critical to a project like this,” he said.

According to the presentation, the entertainment venue would create more than 150 jobs with a payroll of more than $4.25 million. Boyd said it would rake in $12.5 million in sales taxes for Gering. It would also bring in $70 million for the Nebraska Property Tax Credit Cash Fund.

The group’s algorithmic “gravity model” showed a market size of 1.03 million people living within a 125-mile radius of Gering.

“What we determined is this is an extremely viable opportunity here in western Nebraska and the Panhandle,” Boyd said. “Fifty-five plus percent of the visitation you can expect will be coming from out of state.”

That would lead to new sources of tax dollars for the city, county and state, he said.

Global Gaming Nebraska also aims to build a racetrack and casino in North Platte. Boyd said the two locations would not compete with one another. While he did not mention the location or organization by name, a different company, Canterbury Park Holdings, is looking to build a racetrack and casino in Kimball. Boyd said he felt the Gering location had better infrastructure to serve customers in its market area.

Despite a dozen different casino proposals being considered by the Nebraska Racing and Gaming Commission, Boyd estimated that only eight to 10 would actually be approved.

“I think the way the legislature thought about this was really intelligent to tie it back to horse tracks and racing. So you can’t just go build a casino anywhere you want, there has to be a viable opportunity around racing.”

The current proposal calls for the casino to be built around the southern tip of Gering city limits.

Global Gaming Nebraska is a business entity of the Chickasaw Nation, which operates several other casinos and racetracks mostly based in Oklahoma. Boyd detailed some features of those locations, including food truck festivals and Christmas events. He said a Gering site would host similar features.

As for the horse races themselves, the racetrack would mainly feature quarter horses. Boyd estimated as many as 12 races per year once the venue is sustainable and the state has a sizable breeding program in place for the horses.

For construction to commence, the Nebraska Racing and Gaming Commission would have to approve the company’s application, which won’t be an immediate process. On Friday, the Nebraska Racing and Gaming Commission is set to release its final draft of casino regulations. A public meeting regarding the draft will be held on Dec. 17.

Once the regulations are approved, they will need to be signed by Gov. Pete Ricketts to go into effect.

“Development for a casino in Nebraska, in any city, will not take place in our opinion until those rules are signed into law,” Boyd said.

Some of the local officials present had positive things to say about the Gering plan.

“I think from an economic development standpoint, it’s going to be a big shot in the arm for Gering and the surrounding areas,” Stinner said.

Kaufman said the racetrack and casino would be further additions to the city’s plan to create an environment people want to travel to.

“I think this is a perfect opportunity to reap the fruits of that hard work,” he said.

Businesses would be able to sprout up or expand their reach by being based around the entertainment venue, he said.

“...We think we have a great opportunity here in Gering for something in the future and something the community could build around.”

Kissler shares about her 47 years bussing students for Gering

Carole Kissler has been driving busses for Gering Public Schools for 47 years, and has enjoyed every minute of it.

SENIOR SPOTLIGHT: Chris Bliss steps up to the plate

GJHS and the GPS Foundation partnered for random acts of kindness on Wednesday, Nov. 17.

The Courier's Olivia Wieseler shares why she's thankful to participate in the holiday parades this year.

Sean Boyd of Global Gaming Nebraska said the casino and racetrack entertainment venue would create more than 150 jobs and bring in millions for the city and county over the course of the next decade.

Boyd's presentation included comparisons to, and information about, various other casino and racetrack venues which are also managed by the Chickasaw Nation.

Global Gaming Nebraska president Sean Boyd presents to an array of around 20 local officials regarding his group's plans for a racetrack and casino to be built in Gering.