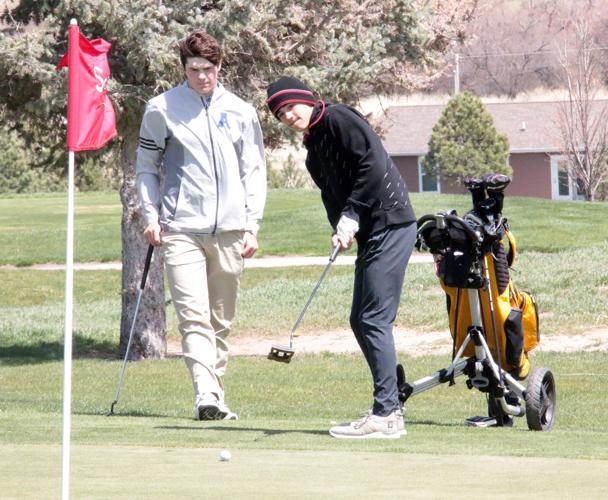 Gering's Jack Maser putts the ball onto the green at Scenic Knolls Golf Course on Monday as Alliance's Jayden McCracken watches on. 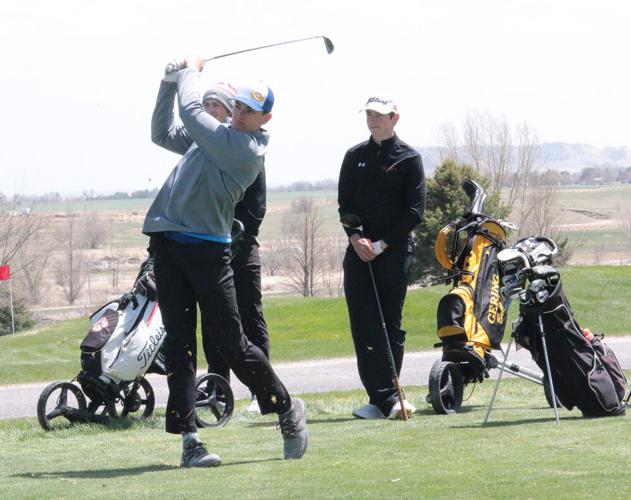 Gering's Dalton Wiese tees off on hole 1 during the Mitchell Invite on Monday. 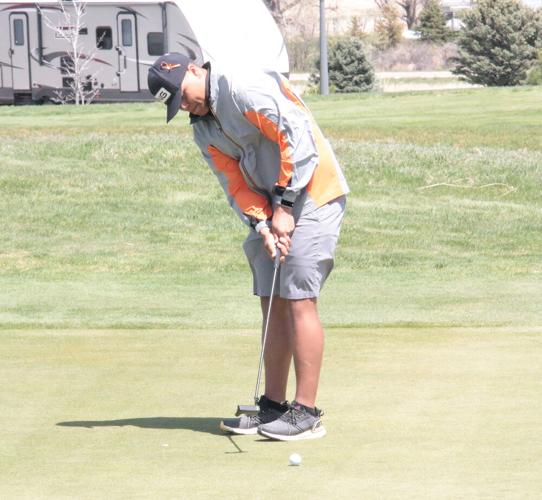 After being postponed a month, the Mitchell Golf Invite took place on Monday, May 9 with the Gering Bulldogs taking second overall behind the Scottsbluff Bearcats.

“Very happy with how I played,” Peters said. “The wind played a huge effect and I’m just happy I can pull through and come out with a win.”

It has been back and forth between Peters and Austin Thyne this season with Thyne always just getting the edge. Since Thyne transferred to Scottsbluff, Peters and Thyne have been facing off in the same group, adding to the competitiveness.

“It’s nice (to be able to get the win),” Peters said. “We really miss Austin back in Mitchell but him going to Scottsbluff kind of makes things interesting and fun.”

Scottsbluff won as a team with a 328 as four golfers had scores below 90 in windy conditions.

“Today had tougher conditions than what we saw on Friday (in Gering). With the greens being so big and undulated, it made it interesting for the kids putting but they played pretty good. They kept grinding all the way through,” Scottsbluff coach Brock Ehler said. “Noah (Shaddick) isn’t happy with his score and he can be far better but we’re coming. We’re waiting for a good weather day and we can kind of break loose. We’re going to shoot a good score this year.”

The 81 score for Dredla was his best of the year.

“Tommy Dredla wasn’t that windy on the front, shot his best nine ever with a 37 and ended up with 81,” Ehler said.

In the windy conditions, Ehler wants his team to trust their swing and not let anything affect the swing they have.

“Trust the swing they have and not try to manipulate it too much to change things off so you don’t let one or two bad shots affect you with the swing you have,” Ehler said. “As they progress and get better, then you can start to manipulate and adjust a little bit.”

Behind Scottsbluff was Gering in second with 351 and Alliance in third with a 361.

“Overall, we had a solid day considering the conditions,” Gering coach Jon Hutchison said. “Having three guys below 90 and one below 80 in that wind is impressive. I’m proud of them.”

The Bulldogs saw two in the top 10; Kelan Dunn in third with a 79, his best score of the year, and Dalton Wiese in ninth with an 86. Also for Gering was Jack Maser with an 89, Tabor Wasson with a 97 and Mitch Culek finished with 100.

“Kelan (Dunn) played well today, shooting a 79 in wind like today is awesome,” Hutchison said. “It is his best score of the year but he is capable of it in every tournament he plays in. He was the only guy who had their best score today but Dalton (Wiese) also placed in the top 10 so I am very proud of him as well.”

Scottsbluff and Gering will be in Ogallala on Thursday, May 12 along with Alliance, Chadron and Sidney.

“We will continue to work on things to strengthen their game and make them more well-rounded,” Ehler said. “I see things all the time on the course and it could be physically or mentally and how you approach certain decision-making ability.”

With Ogallala being the last invite before districts, Gering will work on fine tuning what they can on Thursday.

“We need to fine tune things on Thursday to make sure our entire team is firing on all cylinders Monday at districts,” Hutchison said. “We are good enough as a team to score in the top three and make it to state, but it’s going to take everyone playing well on the same day. It hasn’t quite happened yet, but I have all the confidence in these guys that they can get it done.”

Cougars Washington Alves and Vitor Huertas signed to continue their playing careers together next year at Arizona Christian University.

Softball falls to NJC at regionals

The Cougars softball team ends their season with a defeat against the Plainswomen in the second day of the Region IX tournament.

The Gering girls' tennis team hosted a triangular with Scottsbluff and Alliance on Tuesday as the three teams split.

The Cougars finish the season 21-33 after falling to the Trojans twice on Friday.

The Scottsbluff and Gering boys' soccer teams faced off one final time on Tuesday as the Bearcats advanced to the Class B-8 sub-district final.

Gering's Jack Maser putts the ball onto the green at Scenic Knolls Golf Course on Monday as Alliance's Jayden McCracken watches on.

Gering's Dalton Wiese tees off on hole 1 during the Mitchell Invite on Monday.