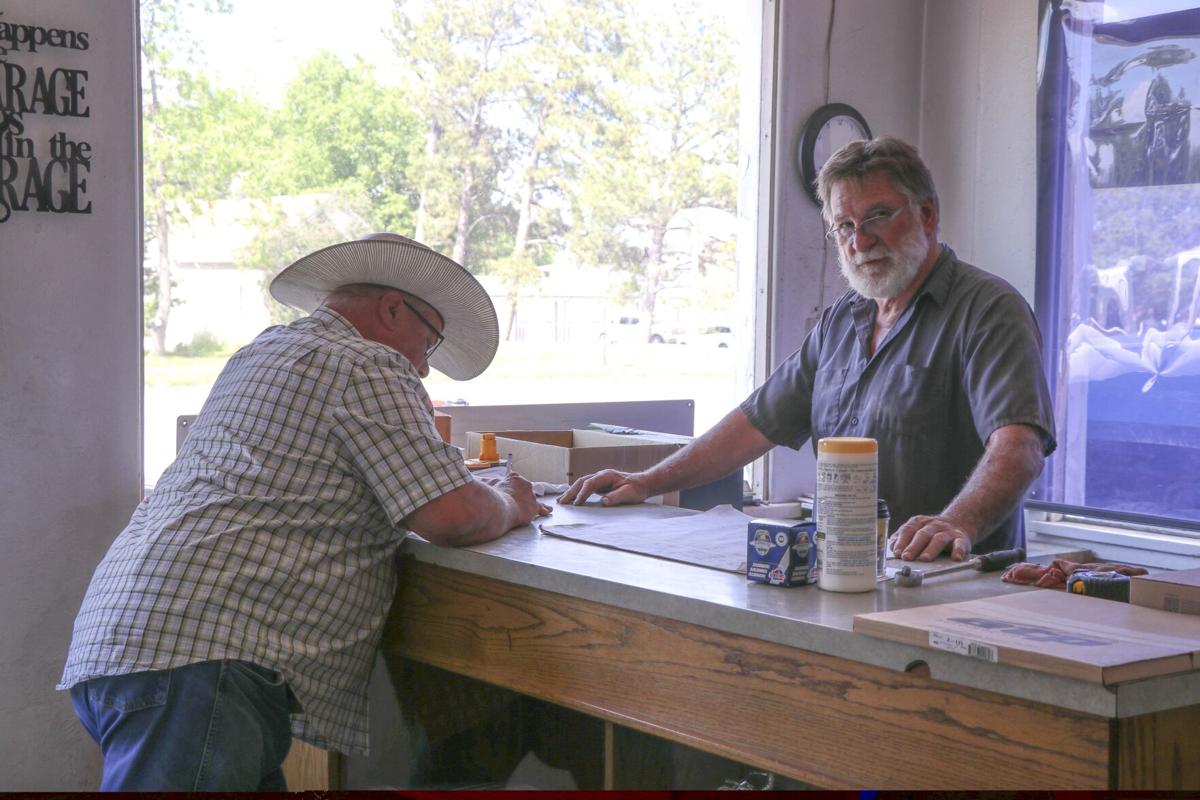 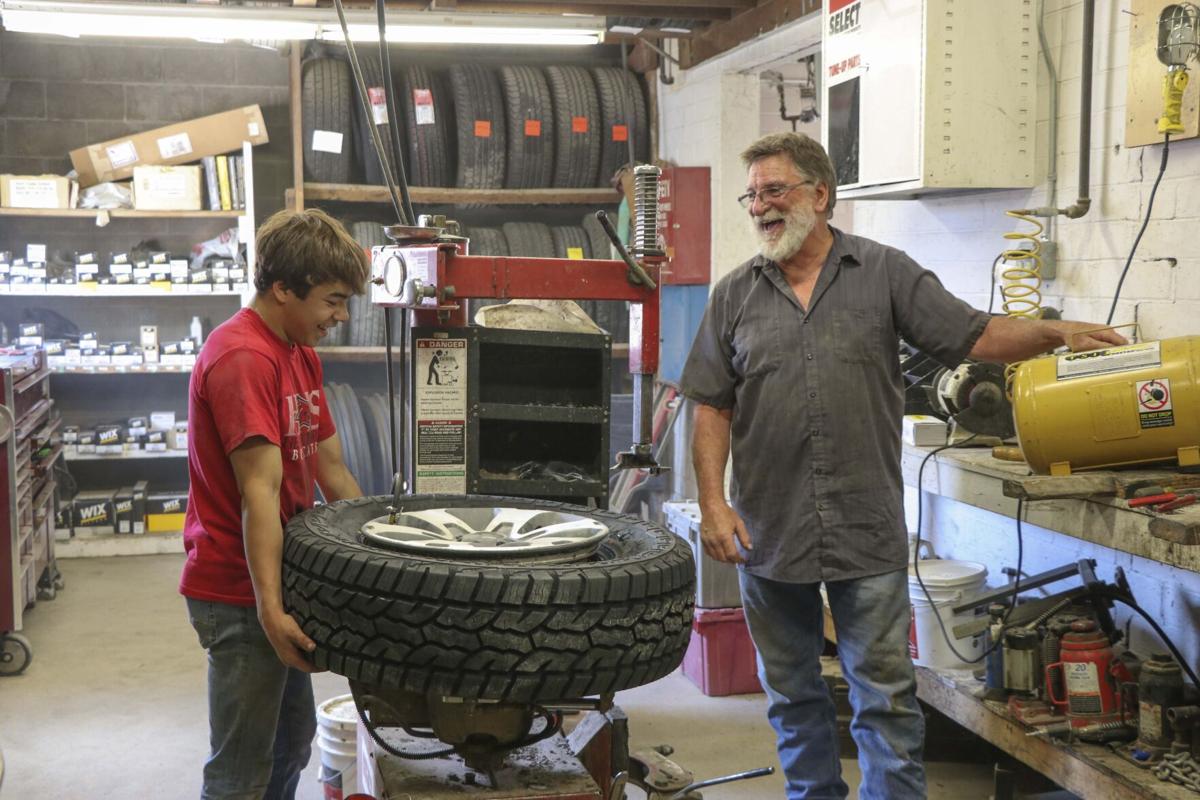 Jess Huss gives his employee Creel Weber a big smile as they wait for the air compressor to kick on.

“I couldn’t be more thankful to officially be cancer free for over a year and back to business as normal for the past few months,” said Jess Huss.

Jess is the owner and operator of Huss Auto. A business he has owned for nearly 30 years.

“I spent nine months in complete boredom,” said Huss. “But I couldn’t do anything except for sit home and heal up.”

On October 1, 2020, Huss was diagnosed with colon cancer. He made several trips to the UCHealth Medical Center of the Rockies for appointments. After removal of the tumor and a little over a foot of his colon the doctors re-segmented his colon he was hospitalized for a lengthy time.

Being a self-employed business owner and important member of the community, the public began various fundraisers and donation efforts including raffles and setting up a donation account at the Hemingford Community Federal Credit Union. Bobcats Beating Cancer was able to help as was the Hemingford Volunteer Fire Department plus many other members of the community. Some of them still remain anonymous.

“I may have been born in Alliance but Hemingford is home,” Huss said. “I wouldn’t want it any other way. The community is great and the people are great.”

“Yes there are some buttheads but what community doesn’t have those,” laughed Huss.

Now anyone that knows Jess knows that he does not beat around the bush and is the kind of guy that will tell it like it is.

“When I was diagnosed with cancer I did not know what life was going to throw at me,” said Huss. “But I sure was thankful for my friends here in the community for their support.”

“This all started with Lonnie Grant, it’s his fault,” chuckled Huss. “I went and saw him in September of 2020 and he said he was retiring in December. He said ‘I’ve been after you for 20 years to get your colon checked out.’ Getting a roto-rooter was the furthest thing from my mind but I said alright. He made the appointment. Dr. Magana did the procedure on Thursday and called on Saturday to say I had cancer.”

Huss wanted to put off the surgery until he turned 65 in March of 2021 when Medicare would kick in but the doctors advised against it.

“So from October 10 when they found it to November 20 when they did the surgery it had grown so much in size that it went from a spot to them taking out over a foot,” Huss said. “I was pretty thankful that we did not wait. The doctor came in after surgery and said that he got it and he would set me up with a cancer doctor. The cancer doctor said, ‘I wish there was something I could do for you.’ I was like what do you mean? He said, ‘You don’t have cancer’.”

“There were six doctors in the room during the operation making sure that they got it all and stayed away from the arteries,” Huss said.

He chucked as he said, “And the bill shows it.”

“Hats off to the folks at the Medical Center of the Rockies,” Huss said. “They’re awesome; everybody in that place is amazing. They’re all friendly, all nice, and all of them care.”

His son Kyle helped keep the business going for customers while he was unable to work.

“The public knew that if I had something that they needed that they could call and he would come down and deliver it,” said Huss.

“Some of my really good customers would call me at home and I was happy to help. Kyle would come down and open the door so they could get what was needed.”

Kyle worked for his dad at Huss Auto when he was in high school and over the years when he was needed.

In June of 2021 he was given the green light to return to work.

“There’s no telling how much money I have in this business,” Huss said. “It was more of a hobby than it was for making money. I moonlighted with mechanics when I was a railroader but then I tore up my knee. I had to make a choice so I joined partnerships and we bought this when it was a gas station.”

That was back in 1987. In 1986 it was a Texaco station that Huss purchased a portion of and then his business partner died in 1993 so he bought the rest of the business.

Huss Auto’s been at his current location at 608 Niobrara since 2008.

“Some of this stuff I bought two or three times over the years,” Huss laughed.

“I’ve seen a lot of changes both in the business and in the community over the years.”

“He’s a good kid that wants to learn,” said Huss. “It’s hard to find a kid like that these days.”

Over the years Huss has employed many high school students during the summer months. Fellow local business owners Robbie Buchheit and Mike Honstein are on that list.

“Most of them were excellent guys and are now excellent men,” said Huss.

He laughed as he added, “Out of 16, I may have fired two. And both of them know why they were fired.”

Along with being a long-time business owner in the community, Huss celebrated his 40th anniversary as a member of the Hemingford Volunteer Fire Department. 35 of those years were spent as an EMT.

The United Way of Western Nebraska Board of Directors is pleased to announce Karen Benzel has accepted the position of Executive Director. She…

In registering visitors for campsites, Nebraska’s largest reservoir sailed uncharted waters in 2021. The predominant verdict is that it was a …

The annual Alliance Chamber of Commerce awards banquet was held Tuesday, January 11 at the West Side Events Center. Those in attendance enjoye…

The University of Nebraska at Kearney announced students who earned a place on the dean’s list for the fall 2021 semester.

Chadron State College has announced that 341 students met requirements for the Dean's List for Fall 2021 by earning at least a 3.5 grade point…

Jess Huss gives his employee Creel Weber a big smile as they wait for the air compressor to kick on.